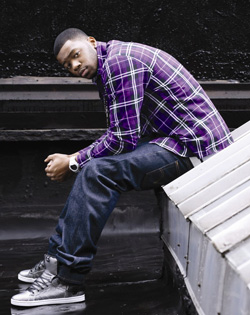 Back in ‘07, did you ever find yourself humming along to R. Kelly’s hook on Jeezy‘s “Go Getta”  Or, on a more recent note, were you one of the Booth reviewers to assign Ace Hood single “Cash Flow” a four or five-star rating?  If so, you’re already a fan of Kevin Cossom—you just didn’t know it until now!  Since he hit the scene with a guest feature on Lloyd Banks “Karma,” Cossom has been building his résumé with songwriting credits for these and many more big-name artists, and now, as the first signee to producer Danja‘s New Age Rocks Stars label imprint, he’s preparing to introduce listeners everywhere to Kevin Cossom the artist.

The Philadelphia-born, Orlando-bred R&B singer took his first foray into the solo spotlight with the December ‘08 release of The Pre-Album, an EP that yielded such Booth-approved cuts as “Compatible”, “You’re A Star (Know What You Doin)” and Rick Ross collabo “My Ex”.  With a yet-untitled first studio album on the horizon, Cossom is angling to parlay his behind-the-scenes achievements and the buzz built by his debut EP into global renown, and cement his status as R&B’s next breakout star.