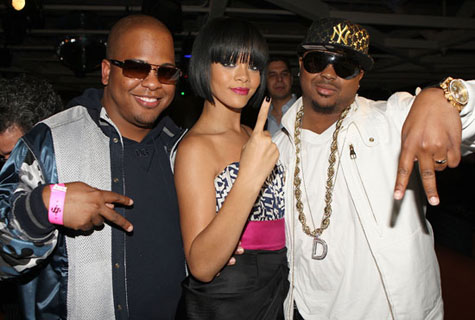 How do you top a monster hit like “Umbrella”? For Tricky Stewart, the answer is easy. You don’t. The hitmaker behind 2007’s chart-topper speaks exclusively with Rap-Up.com about producing the biggest album of Rihanna’s career.

There are reports that Rihanna’s fourth album will drop before the end of the year. Is that true?
I do believe it is. We’re actually just getting started. I just wrote some records that I’m in love with this past week. Rihanna and I will be getting in the studio sometime in the next two weeks, so we actually have not recorded anything for her new album yet.

Read the rest after the jump,

Do you set out with the intention to top a hit like “Umbrella”?
I just try to chase greatness and I try to do what at the time is going to be something that is looked at as truly great. You can’t say what record is gonna be a bigger hit than whatever because the hit is always about the connection of how the people feel about what you’ve done. You can never get a gauge on that until the record is actually out. You can make records with your instincts to try to top what you did as far as the greatness that you put into the last record.

What’s it like working with Rihanna?
She’s just a pleasure. She’s a very sweet, down-to-earth person. You would never know how successful she is ’cause she’s just so nice and warm. I guess maybe it’s her background of being from the islands. She’s just a really sweet, warm person to be around.

How did “Umbrella” change your life?
“Umbrella” changed my life because it was the first hit record that made people want to know who I was. I’ve had hit records before with [Mya’s] “Case of the Ex” and JT Money’s “Who Dat” and records here and there, but this was the first record that people go, “I wanna know what that guy is. I wanna know who those guys are.” That was the biggest thing. At that point when that light came on, [The-Dream and I] had been down in Atlanta just getting ready for that moment, so we were really prepared for the ride.