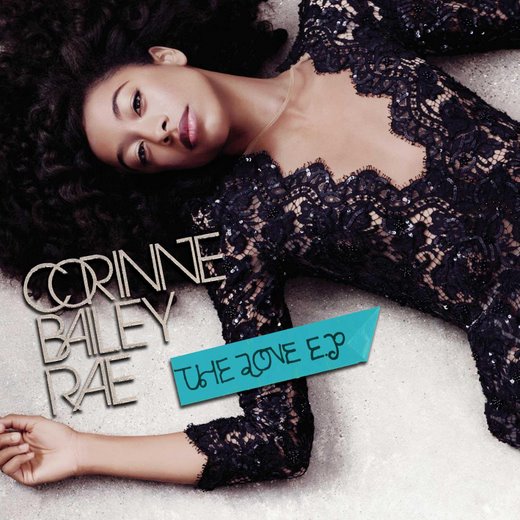 Here is some exciting news for the Corinne Bailey Rae fans. While touring the world in support of her sophomore LP The Sea, the soulful singer/songwriter has been working on a covers project of her favorite love songs. The aptly titled The Love EP will be released, digitally only, on Valentine’s Day.

The set features unique cover versions of some of her favorite songs recorded on tour, including Prince’s “I Wanna Be Your Lover,” Belly’s “Low Red Moon,” Bob Marley’s “Is This Love?,” a Stevie Wonder influenced take on Paul McCartney’s “My Love” and a Sly & The Family Stone inspired live version of Doris Day’s “Que Sera Sera”.

“I recorded this EP as we travelled, taping a gig in Washington DC, snatching a few hours in an Amsterdam studio, recording backing vocals under a duvet in freezing New York, sweltering in Las Vegas as we couldn’t record with the noisy air-con turned on, editing in the back of a tour bus in Korea and channelling vivid memories of racing around Coachella trying to catch Sly Stone’s performance,” Corinne says.

“Not only is this EP an homage to some of my favourite musicians and a conversation between some of my musical influences, but these tracks are snapshots of my year around the world.”

Corinne breaks down The Love EP track by track:

01. I Wanna Be Your Lover
I met Prince in London at his gigs at the O2 and he gave me loads of encouragement. I was amazed by the gig but even more impressed by the aftershow he did in a small venue where he tore up on the guitar and played other people’s songs too. This is one of my favourite Prince songs and gives me the chance to sing the kind of sexy, rhythmical music I love but never seem to write. Getting the chance to do this song was a dream.

02. Low Red Moon
Belly were one of the prime influences on my first band Helen, where we had a real indie/DIY ethic. I was addicted to their album ‘Star’ as a teenager and learnt loads about guitar playing just listening to them. They made me realise the most important thing in music was to express yourself and get your ideas across, without worrying about playing like a virtuoso. We had such fun playing this song, it’s like an aggressive 60′s science-fiction soundtrack.

03. Is This Love?
My mum was the Bob Marley fan in our house which I loved, because although my father is Caribbean, he didn’t much care for reggae. Little examples like this meant I grew up learning that you could be yourself and never had to be a cliché because of your ethnicity. And Bob Marley is such an incredible songwriter, which means you can approach his songs in so many ways. I wanted to put ‘Is This Love?’ into 6/8 and bring the tempo back to underline the poignancy of the lyric, and then Steve Brown arranged the piano part into something reminiscent of Carole King or Aretha Franklin’s gospel-soul piano style, which gave it a whole extra level. When guitarist John McCallum added in this Hendrix/Curtis Mayfield sound, it brought in a whole American doo-wop dimension too. So it’s like a whole bunch of my favourite influences in one beautiful song.

04. My Love
I first heard ‘My Love’ at an event for Paul McCartney at the White House, where I was invited to play. A string section played the song and I was struck by the fragility of that ascending melody on “My love does it good”. I was also really touched by Stevie Wonder and Paul McCartney’s relationship; their mutual respect and the fact they had known each other so long. When we recorded this song the harmonies and keyboards were definitely influenced by Stevie’s sound.

05. Que Sera Sera (live)
‘Que Sera Sera’ is a song we have been closing our gigs with all over the world. I love Sly and the Family Stone’s version, how he takes what feels like a nursery rhyme in Doris Day’s lovely hands and turns it into a philosophical outcry, declaiming “The future’s not ours to see”. Sometimes I attack this lyric angrily, sometimes I’m all peaceful and surrendered to it. What an amazing song. We recorded this super-long version in Washington D.C one night when the magic in the air meant we didn’t want to get off stage. I hope you enjoy listening to it as much as we enjoyed playing it.