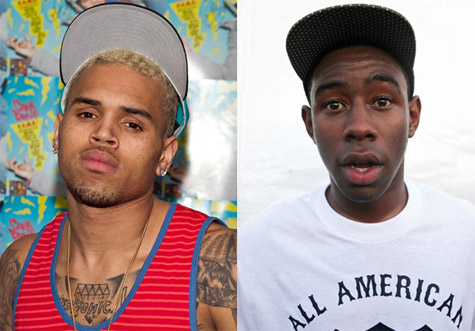 Chris Brown and Odd Future are burying the hatchet on their Twitter feud. Following their heated exchange of words over the past month, the fellas have decided to put it all behind them and move on.

Earlier today, a video surfaced of Odd Future crooner Frank Ocean being chased down by Chris’ affiliates while driving in his BMW through Los Angeles. They screamed obscenities as they pulled up alongside him. The video added more fire to their escalating feud, but both parties are ready to call it quits before things get dangerous.

“This Shit Isn’t Gonna Stop Till Someone Gets Fucking Killed. I Feel Like Its Gonna Be One Of My Ni**as Just Skating Down The Street,” wrote Tyler, the Creator.

“Send 7 Dudes With A Camera To Make Frankie Look Like A Bitch, Like, Really?” he added. “And Its Not [Chris] That’s Doing It, Its The People Around Him. They Like ‘You Gonna Let Him Say That? Fuck That Ni**a’. This Shit Has Gotten Outta Hand. Real Shit.”

Frank chimed in saying he was done beefing and planned a break from Twitter. “alrite. this has to end. freeze on social networks for a minute. freeze on the internet. freeze on the matrix. real world time. brb,” he wrote.

Chris echoed their sentiments, tweeting, “This beef shit is stupid, @frank_ocean I respect ya music and you and Odd Future! Ain’t beefing wit nobody. Y’all can have that! Love.”

Tyler responded, “@chrisbrown Shit Got Too Real On Both Ends. I’m Over It. We’re All Over This Shit. Its Stupid As Fuck. Swag It Out.”