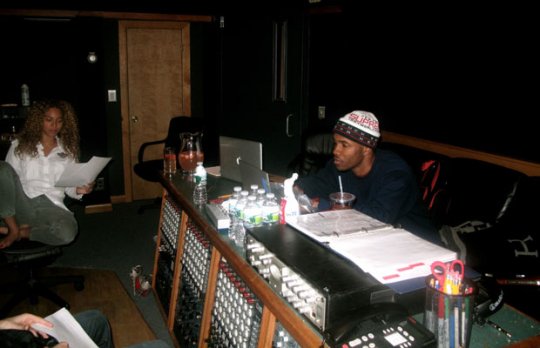 Beyonce Knowles is one of a few artists that the media constantly hounds anyone and everyone for even the smallest detail about her recordings.

So, when newcomer singer/songwriter Frank Ocean released this candid photo of a recording session between them, the internet and media went crazy. He was a brand new name to most, and considered to be an underground artist. To be offered the chance to write with a megastar like Beyonce was a pivotal moment.

After the initial media fire on this recording session, Frank then removed the image from his blog. Leaving many wondering if he received backlash from the Beyonce machine, or if it was all intentional, and, what would happen to their collaboration?

Fast forward to May 25th, the day of her premiere performance of “1+1” on the American Idol finale. Beyonce’s team officially releases the final tracklisting of her most-anticipated album, 4 (due June 28th). The full creditials of the project have not be unleashed yet. However, we have learned that Mr. Ocean has just landed his most important placement yet.

The third track on the LP, entitled “I Miss You,” a collaboration with Shea Taylor (Run The World) and Beyonce, co-penned by Frank.

A rather short, reflective, emotional ballad, laid over a simplistic, airy track. Which, almost acts as an interlude or transition into B’s recently released, official 2nd single “Best Thing I Never Had“. Speaking of which, BET.com spoke with co-writer J. Que of The Clutch, who opened up about the creation of the record, working with Bey for the first time, along with Babyface. Check that out below.

Beyonce’s forthcoming fourth studio album 4 hits stores June 28th. Are you excited for the release? Tell us your thoughts…

Patrick “J. Que” Smith on the creation of “Best Thing I Never Had”

Penning a potential single for an international superstar with a boatload of chart-topping hits could be a nerve-racking task for any songwriter, even a vet. Patrick “J. Que” Smith, a member of the production/songwriting collective The Clutch, who has penned tunes for Usher and Fantasia, admits collaborating with Beyoncé was initially a pretty intimidating undertaking. BET.com caught up with the man behind Bey’s latest single “Best Thing I Never Had” as he recalls his eye-opening studio experience with the music icon.

“I have been writing with Tony Dixon for years,” J. Que says. “Tony & Kenny “Babyface” Edmonds started working together. I got a call from Tony telling me that they were going in to do some work with Beyoncé. I happened to be in Los Angeles and Tony was like, ‘why don’t you come over to the studio.’ So I was like ‘cool.’ I stopped through. Wrote a little bit. And was super nervous, to be completely honest.”

The 36-year-old producer was further shook by the added pressure of working with one of his musical idols, Babyface. J. Que admits he didn’t know what to expect when Edmonds joined the writing session to add his input to the song.

“After a day or so, Tony and I really sat down and we got into “The Best Thing I Never Had” record,” J. Que remembers. “ But Kenny [Babyface] came along afterwards, heard it and made some changes. You know—a word here, a word there, a melody here, and all of a sudden the record had a completely new life. He [Babyface] is absolutely masterful at what he does. And I’m super honored to be working with dude.”

After the Los Angeles studio session with Tony Dixon and Babyface, the North Carolina native was invited to a super exclusive recording session with Beyoncé.

“We went to NYC and did a weekly recording. We wrote six records and recorded five. When she [Beyoncé] heard “Best Thing I Never Had” she really dug it. She had a couple of things she wanted to tweak. But she was jumping up and down, literally. I was amped and absolutely floored at how beautiful she was in person. I wasn’t ready for that.”

Once the songwriter overcame his bout with nervousness and got down to recording the empowering ballad with the Grammy Award–winning songstress, he was immediately awestruck by her drive.

“Her work ethic is nuts. I remember the night she came in and recorded “The Best Thing I Never Had” she got to the studio at maybe 9PM. She came off of the plane, and walked into the studio. We played the record. She loved it! She jumped in the studio and knocked out three records that night. And she didn’t get started until 10pm. So her ability to really push like that and stay hungry and focused absolutely blows my mind.”

Adding to that, J. Que says the music superstar was “extremely humble.”

“She was incredibly grateful that we came out. She’s super cordial. She’s still a Southern girl. And my favorite thing though, easily, was how much she turned into a fan when Babyface came into the room. She became a fan. She was the one sitting down excited to hear the stories and what Kenny was talking about. It’s always cool when you get to see people that you look at in that spotlight and you see them actually become the fan. That was great.”

KERI HILSON OPENS UP ABOUT THE 'DEEPEST SONG' SHE'S EVER WRITTEN