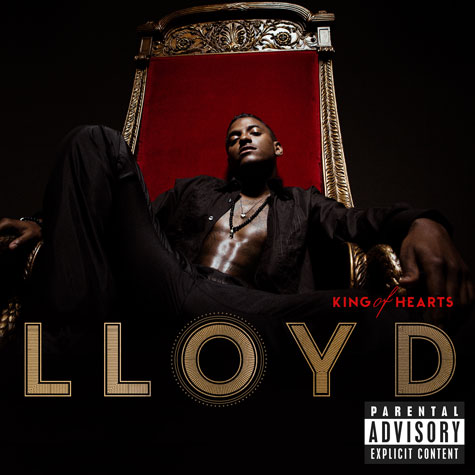 Lloyd is hitting from all angles of the romance spectrum on his forthcoming album King Of Hearts (due July 5th). Mr. Romance and his partner/label boss Polow Da Don have aligned an all-star team of collaborators for the “Lay It Down” singers fourth studio album. The 11 track set boasts cameos from R. Kelly, Trey Songz, Chris Brown, Keri Hilson, Andre 3000, Lil’ Wayne and more. UPDATE: When Lloyd vlogged the album was finally done, we should have known they made some last minute changes. The young goldie switched up the song order and added some tracks to his much anticipated new album.

Follow the jump to peep the New Official tracklisting and let us know what you think. Will Polow’s claims of the album being a classic hold true?

Adding Game to the intro of an R&B album?? Hmmm…not sure how that will go over. I still don’t see “Stay,” after Lloyd said it will be on the album, possibly a bonus track?? “Shake It For Daddy” sounds like a jack from Robin Thicke, but I am excited to hear “You (Part 2)”. Also it seems Polow jacked the anticipated last track “World Cry” from Jah Cure, who was previously promoting This Song last year featuring Keri. But the new line-up sounds like it will be classic…