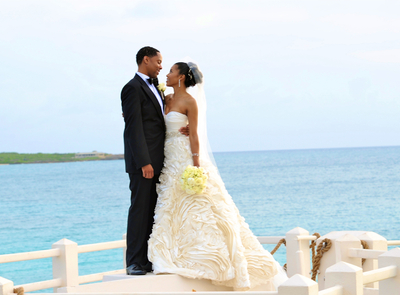 It’s been an exciting year for Grammy-nominated recording artist Ameriie. On June 25th she married her dream guy, former Columbia Records executive Lenny Nicholson, on a cliff in a beautiful island ceremony, and now she’s back in the studio creating a new album for her fans.

Essence caught up with the new Mrs. Nicholson when she returned from her luxe honeymoon in Anguilla, and the famously private songstress really opened up for the first time ever about her love and connection with Lenny, and why she can’t wait to share her new album.

ESSENCE: How did you and Lenny fall in love?

AMERIIE: I was working on my second album. The whole vibe of this album was that I’m free and I’m single and I’m not checking for anybody. So I’m there and I feel a tap on my shoulder. I look up and it’s him. I didn’t totally recognize him because he had a hat on. So I’m like, “Who are you?” He’s like, “I’m your A&R!” I was like, “Oh I didn’t recognize you with the hat on.” So he took off the hat and I just remember thinking that I knew he was cute but he was on a whole other level. We’re having the session and we just start texting each other back and forth throughout. We knew each other professionally but not personally, so it was sort of weird at first. But somehow we had a conversation and agreed when we got back to New York we’d go on a date. We went on that date on November 3rd. We’ve been inseparable ever since and that was seven and a half years ago. We remember all of the dates.

ESSENCE: What did you and Lenny say to each other in your vows?

AMERIIE: We did traditional vows. The thing with Lenny and I is that we write each other all the time — things like personal emails and love letters — we’ve always done that. The things that people would probably put in their vows we put into our emails, love letters, and cards to each other so we do a lot of those things. For the wedding we were thinking traditional because it’s something that’s been said for hundred and hundreds of years and I love history and old things.

ESSENCE: What’s up next for you?

AMERIIE: Right now I’m continuing the recording process for the album. The album is called Cymatika, which is named after cymatics, the study of visual sound. The last album was very hip-hop soul, R&B, and rock, but this time I fused electronica and new wave, and a lot of classic song structure. I usually sing about love but for this album I really wanted to talk about the human experience. Not in the romantic sense but just being who you really are and not running from yourself.

Check out Essence.com for the full interview.