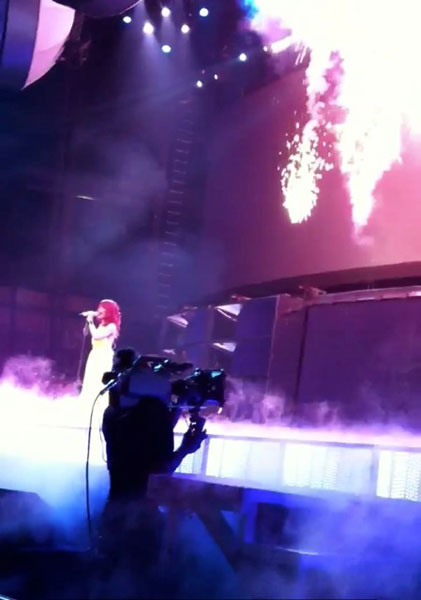 Rihanna set the stage on fire—literally—during her “LOUD” tour stop in Dallas, Texas, on Friday night (July 8). The red-haired singer was performing “California King Bed” when a light high above the stage burst into flames at the American Airlines Center.

RiRi, finished the song before exiting underneath the stage. Shortly after, smoke filled the arena as the house lights came on and the flames were extinguished. Fans in the front row started making their way toward the exit and eventually the entire venue was evacuated.

Following the incident, Rihanna took to Twitter. “DALLAS!!! We set the stage on FYAH tonight!!! LITERALLY!!! I’m so pissed, I was havin so much fun wit yall too!!! I gotta come back man!!” she tweeted. “DALLAS yall CRAY!!! Love this fuckin place! Glad u guys are safe!!! I promise I’ll be back!!! #MoFYAH.”

She later said that she was headed to a production meeting to find out what caused the fire. The concert is expected to be rescheduled. See the video footage below.