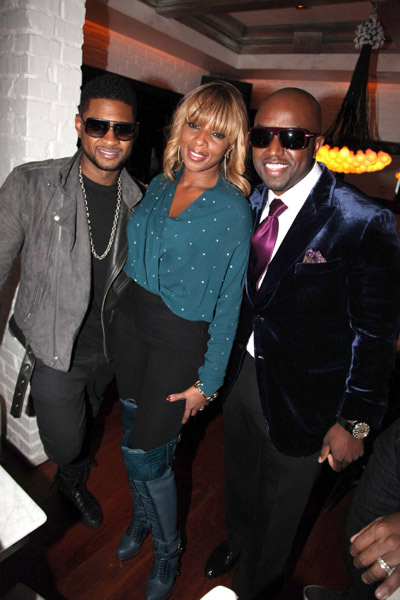 Rico Love turned the lights all the way on at his star-studded 29th birthday bash hosted by Usher, Mary J. Blige, and Diddy during Art Basel week in Miami on Friday night (Dec. 2). The Grammy-winning songwriter/producer, who’s written hits for Beyoncé, Kelly Rowland, and Diddy-Dirty Money, partied with his friends including Timbaland, Cee Lo Green, Yelawolf, Maino, Irv Gotti, and his Division1 signees Cherlise and Teairra Mari, who celebrated her 24th birthday. Guests dined on Italian fare at the invite-only dinner at Vic & Angelo’s before heading to the after-party at Club Play.

Rico was presented with the Grammy for Best Male R&B Vocal Performance for “There Goes My Baby” by his close friend and mentor Usher, while “4 AM” singer Melanie Fiona serenaded him with “Happy Birthday” before he blew out the candles on his five-tier music-themed cake.

“I had such an amazing time! I had Diddy, Usher, and Mary hosting, my closest friends celebrating with me—this was so epic,” said Rico, who was named SESAC’s Songwriter of the Year. “2011 was such an incredible year for me and I look forward to another year of #1 hits.”

See the pics below.