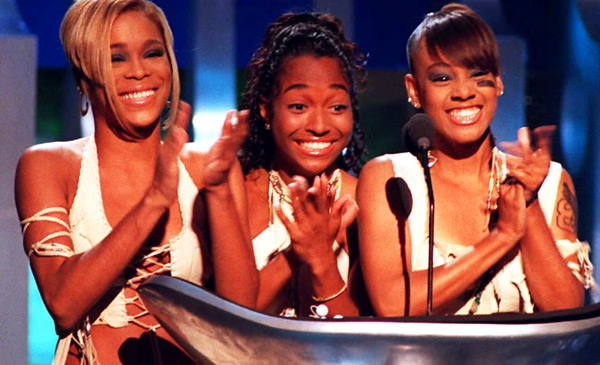 VH1 may be known for reality television, but the network just announced plans to develop a scripted film that should make you excited. The film, the first in a series of music bio-pics, will be based on the evolution of influential female musicians TLC. It will be penned by screenwriter Kate Lanier.

Tionne “T-Boz” Watkins and Chilli have both signed on to consult and produce the film. “I always felt our story had to be told,” Chilli says in the press release for the film, below. And it’s quite a story. Read on for more details about the project.

Acclaimed Writer Kate Lanier Signs On To Ink The Script

LOS ANGELES, CA – December 01, 2011 – Building off the success of the scripted movie “Single Ladies” and its follow-up hit series, VH1 is getting into the TV movie business with a series of scripted bio-pics featuring musicians and pop culture icons. The dramatic story behind the legendary ’90s R&B/hip-hop/pop trio TLC will be featured in the first TV movie for VH1 in this series. The two surviving members of the group, Chilli and Tionne “T-Boz” Watkins, have signed on as consultants and executive producers for the movie. Acclaimed screenwriter Kate Lanier (“What’s Love Got To Do With It” and “Beauty Shop) has signed on to pen the bio-pic.

The gifted trio TLC, which was comprised of Chilli, Watkins and the late Lisa “Left Eye” Lopes, achieved instant commercial success with their first album, Ooooooohhh… On The TLC Tip in 1991 which sold over 6 million copies worldwide and spawned numerous Top Ten singles. But it was the release of their second album; CrazySexyCool in 1994 that elevated them to superstar status, that album sold over 22 million albums worldwide to date and propelled TLC to become the most successful female group in history. They went on to record Fanmail selling over 10 million albums and 8 Grammy nominations before Lopes’ untimely death in 2002.

Unfortunately, fame and success are often shadowed by pain and heartache and TLC certainly experienced their share. Tionne suffered from sickle-cell disease, Lisa accidently burned down her then-boyfriend and football star Andre Rison’s home in a moment of heated passion. The trio also suffered a very humiliating and public bankruptcy suit at the very height of their career success. This prompted them to hold a press conference about the ins and outs of accounting in the record industry to let the public know how this could happen to multiplatinum, Grammy-winning superstars when everyone assumed they must be extremely wealthy.
In the midst of what the ladies were experiencing as individuals, a public dispute between Lisa and her group-mates Tionne and Rozonda arose when she felt she had been all but cut out of their third album, FanMail. Fortunately, the ladies had patched things up and were working on their fourth album, 3D, when tragedy struck and Lisa was killed in a car accident while on a spiritual retreat down in Honduras. In a tribute to Lisa, TLC gave one final concert in June of 2003 at the Zootopia concert in New York’s Giants Stadium where Tionne and Chilli performed on stage to 60,000 fans in front of a video screen playing videos of Lisa performing the same songs right along with them.

Kate Lanier who has penned numerous scripts featuring female protagonists including the hits “What’s Love Got To Do With It,” “Beauty Shop,” and “Set It Off,” will write the script for VH1.

“With the tremendous success of our scripted series ‘Single Ladies,’ we now know that viewers will come to VH1 for quality scripted projects. We’re eager to expand on that success with this bio-pic franchise that will allow us to explore our music, pop culture, and authentic storytelling strengths in yet another format,” said Jeff Olde, EVP Original Programming & Production, VH1. “We’re honored to collaborate with Chilli, Tionne and Bill Diggins in sharing their own personal story and TLC’s record-breaking legacy with VH1 viewers.”

“The reality of this brings me to tears because I am seeing one of my dreams come to life. I alwaysfelt our story had to be told. What makes it even more amazing is having Kate Lanier on board. I remember watching ‘What’s Love Got To Do With It’ with Lisa, and I knew then whoever wrote that story had to write ours. I will forever be thankful to Jeff Olde for believing in our story and going the extra mile to make it happen,” said Chilli.

“I’m just overjoyed. I appreciate Jeff Olde and everyone on staff at VH1 that took interest in us, thank you. Kate Lanier is amazing. I’m honored to work with her I love her art. Well here we go on another TLC ride and I can’t wait. Like Biggie said ‘Now if ya don’t know, now ya knowwwww,’” stated Tionne.

For additional information on VH1 follow @VH1 on Twitter or “Like” VH1 on Facebook, and visit VH1.com for all the latest in music and celebrity news. You can also check out the full episode of Behind The Music Remastered: TLC on VH1.com.