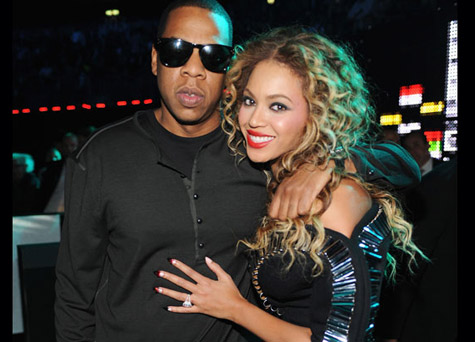 It’s official!! They are 3 from that 2. Beyoncé and Jay-Z are the proud parents of a baby girl! The famous couple welcomed a daughter on Saturday night in New York City, according to multiple sources.

The baby was born via scheduled C-section. There are slightly varying reports on what they named her. E! News claims that Jay-Z is telling friends that his newborn’s name is Blue Ivy Carter, while TMZ reported it as Ivy Blue Carter.

Their pal Rihanna was among the first to congratulate the new parents. “Welcome to the world princess Carter! Love Aunty Rih,” she tweeted.

B’s sister Solange tweeted, “The most beautiful girl in the world.”

According to the NY Daily News, Beyoncé, checked into Lenox Hill Hospital on New York’s Upper East Side on Friday night under the alias Ingrid Jackson. The couple reportedly rented out the entire fourth floor of the hospital for $1.3 million.

Beyoncé first announced her pregnancy in late August at the MTV Video Music Awards.  In a previous interview on “20/20,” Beyoncé shared her excitement about becoming a mother. “The best thing is knowing that my favorite person in the world I haven’t met them yet, and hopefully I’m gonna pass on things that generations of my family have passed on to me,” she told Katie Couric.