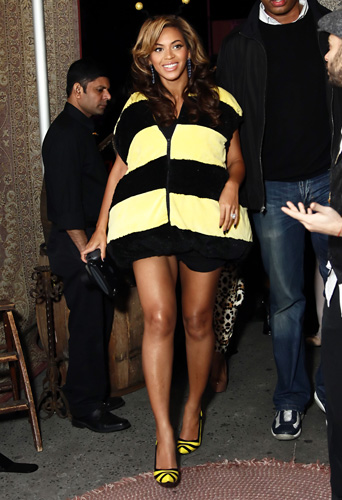 Beyonce is always referred to as B, and her Halloween costume last year was fitting of the nickname. In ironic news its appears the superstar and her famous Destiny’s Child song “Bootylicious” have influenced the title of a rare Australian fly. According to the Huffington Post… “A newly discovered horse fly in Australia was so “bootylicious” with its golden-haired bum, there was only one name worthy of its beauty: Beyonce.

Previously published results from Bryan Lessard, a 24-year-old researcher at Australia’s Commonwealth Scientific and Industrial Research Organization, were recently announced on the species that had been sitting in a fly collection since it was captured in 1981 – the same year pop diva Beyonce was born.

He says he wanted to pay respect to the insect’s beauty by naming it Scaptia (Plinthina) beyonceae. Lessard said Beyonce would be “in the nature history books forever” and that the fly now bearing her name is “pretty bootylicious” with its golden backside.”

Take a look at B’s new fly friend below.