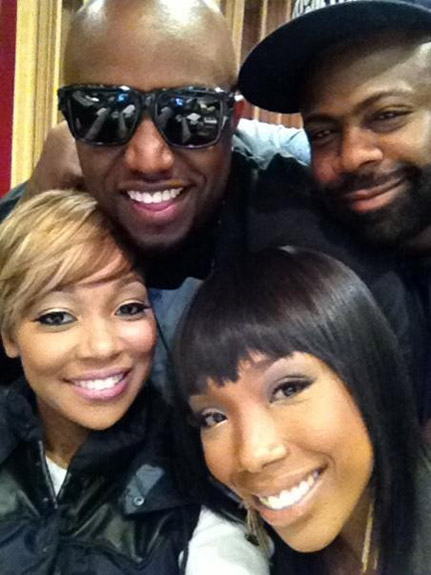 The year was 1998 and Brandy and Monica were sitting on top of the charts with their smash “The Boy Is Mine.” Fourteen years later, the R&B divas have reunited to record a follow-up to their Grammy-winning duet, which spent 13 weeks at No. 1. Under the direction of songwriter-producer Rico Love, the new record picks up where the original left off.

The “Motivation” hitmaker hit the studio with both ladies last week in Miami to lay down the track. While they reportedly didn’t get along while recording the original Darkchild production, the chemistry was different this time. “They both had a blast,” says Love. “They have so much history together.”

In an exclusive interview with Rap-Up, Rico Love sheds light on how the collaboration came together, what it sounds like, and the enormous pressure he faced.

What can you tell us about recording with Brandy and Monica?
It was a really interesting situation because of the history that was in the room and the energy was so positive. It was electric. I really wanted to try my best to pull the most explosive vocals out of them. I wanted to create a story that picked up where “The Boy Is Mine” left off. It kinda carried on the next part of the story, just showing their growth and their maturity, and making it real and true to both singers. It was an amazing energy, an amazing vibe. The girls were all positive. It was just fun. We had a great time and I learned so much from both of them during the session.

How did the duet come together?
It was Monica’s idea originally because Monica heard the record and she was so excited about it. She was like, “Yo, I really think that this should be that thing, that next duet.” Then [RCA Records executive] Peter Edge and [Chameleon Records CEO] Breyon Prescott put it together.

How would you describe the track?
It’s a very soulful R&B song with pop sensibilities. I wanted to make sure I made it a classic R&B record, but I definitely wanted to make sure that it had enough appeal to cross over and become a Top 40 record. I wanted to include Beatles-sounding guitars. I made sure the melody was big enough for all genres and just a strong powerful vocal performance and strong content. I really don’t wanna give away too much because they wanna keep it under wraps as far as the title and the subject, but I can just say that it’s a very strong vocal that I got out of these girls and it’s a very strong subject. To say the least, it will be a shocker.

When they recorded “The Boy Is Mine,” they were not the best of friends. What was their chemistry like in the studio?
It was fun. They both had a blast. We laughed and hung out. They’re like old friends. They have so much history together. It was like sisters.

Did you feel pressure to deliver after the massive success of “The Boy Is Mine”?
Amazing pressure because no matter what, people on the blogs will comment, “Rico ruined it and it’s the worst song ever.” You always get those the first day the record comes out, but you gotta ignore that. “The Boy Is Mine” was No. 1 for like 13 weeks. The hype around it is so big now since the pictures came out the other day on Twitter. Honestly I’m the one that’s gonna take the fall for anything, so it’s huge pressure, but I thrive off that type of pressure. I feel like that’s why I wake up to do what I do, to continue to write songs for legendary artists, and try to reinvent the wheel as much as I can.