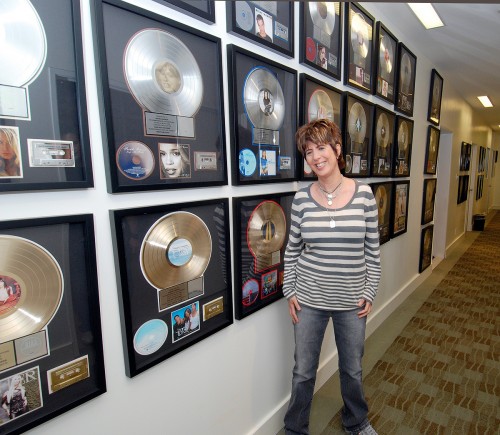 Diane Warren can easily sit at the table of the greatest songwriters of all time. In a recent interview with our friends over at ThatGrapeJuice, the multi-Grammy winner shared her adoration for Beyonce, and told the story of how their song “I Was Here” happened. Diane went on to talk about their upcoming work on the anticipated remake of A Star Is Born, some of her favorite artists right now, who she has recently gave great songs to, who she would like to do a whole album with (big surprise), how shes feels about Nicki Minaj and more.

TGJ: What would you say are some of your favorites of your songs?

DW: One of my favorites is ‘I Was Here’ from Beyonce’s album. It was a cool story how the whole thing happened with her. I was waiting for a meeting with an A&R guy at my house. I had my guitar there and he was two hours late. I started making up this song saying “I want to leave my footprints on the sands of time”. Pretty cool opening line. I thought “one person I’ve yet to work with is Beyonce”. I literally called Jay Z up and played him the song. And, he thought it was one of the best songs he’d heard and he had her call me and she loved it. And, literally this was on a Monday with her album due to be mastered that Friday. She came in that Wednesday, sang it, and blew my mind. I mean her vocals were amazing.

TGJ: It’s amazing how things just fall in place like that!

DW: I know! Who would’ve thought it would happen and she only heard it one time on the phone and decided to basically stop her album and get the song on it. Her work ethic is…just amazing. She sang for three hours and it was the best vocal I’d ever heard. She took a dinner break and told me “I’m just getting started”. That’s what separates the good and the great.

TGJ: Mentioning Beyonce, we recently read quotes where you mentioned you’d do “anything for Beyonce”…

DW: Yeah! Artists like that can come at 4 in the morning and lets do it! Tell me what time, I’ll walk or fly there. The artists that are cool and good artists, absolutely, I’d do that. She’s a cool person and I’m doing ‘A Star Is Born’ with her now.

TGJ: And how is that going? What should we expect different from Barbra Streisand’s iconic version of the film/soundtrack?

DW: This is going to be the new iconic version with Beyonce. She’s going to be great. Clint Eastwood’s doing it. You can’t do better than that.

TGJ: On that same note, anyone you haven’t worked with that you’re looking to? Singer and/or songwriters?

DW: Not one person. I love great voices and great singers. I love Andre Bocelli. Fun to go from people like Keri Hilson, who I just worked with (who’s amazing by the way). She’s a great singer. Also a few country people. I’m all over the map. It’s so funny how [Keri and I] met. Twitter!

TGJ: Speaking of Twitter, your sense of humor has definitely made headlines recently – namely a comment about rapper Nicki Minaj’s ‘Stupid Hoe’ where you mentioned you’d change it to your own tune ‘Dumb…(insert expletive)’.

TGJ: What do you think of Nicki Minaj generally?

I think she’s cool. I’d love to work with her. Somebody played me something today called ‘Ass’ [by Big Sean]. Yeah, it’s not something that I would write. It just was like “whoa”. I’m not prude or anything, call me crazy. It’s not my thing. I think there are more clever, creative ways to get down and dirty. I think Nicki’s pretty good though. I wouldn’t write songs about ass-eating and stuff though.

TGJ: So we’ve talked about Beyonce and Nicki and previous projects, but who’s up next to work with you? We’re hearing rumors that you’re working with Whitney Houston.

DW: Not yet. I would love to because I did a few songs on her last project like ‘I Didn’t Know My Own Strength’. I’d love to work with Whitney anytime but we’re not as of yet. I will be working with Beyonce, working with Kelly Rowland, Keri Hilson then Beyonce again. Akon, John Legend, a new guy named Luke James. He’s excellent. I gave him a really great song. Also, a new artist named Emeli Sande. Just all over the place. Also, just did a great tune for Jennifer Hudson for the movie ‘Winnie’ where she plays Winnie Mandela called ‘Bleed For Love’. We’re hoping the movie comes out this year.

BEHIND THE SCENES: MONICA & BRANDY "IT ALL BELONGS TO ME" IN-STUDIO