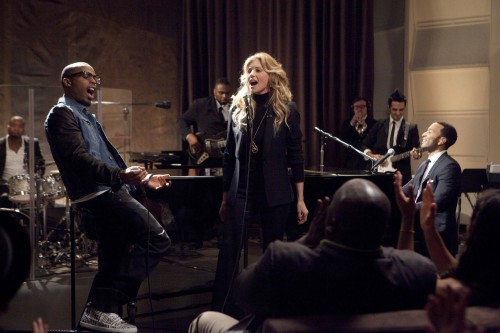 Nine-time Grammy award winner John Legend is about to extend his already lengthy resume. The soulful crooner is in the mist of pitching a Music Series with the Showtime Network. The currently untitled show will feature artists from different music genres discussing their careers and performing original music collaborations in front of a live studio audience. Find out all the details after the jump.

Jesse Dylan son of icon Bob Dylan is serving as director for the series. Legend will serve as the host and Executive producer with his Get Lifted Film Company partner Mike Jackson. Producers are already impressed with the pilot. The next installment of the show is set to be recorded before the Grammys on February 12th.

At the first taping of the show, country tycoon Faith Hill and rapper B.O.B., were recorded performing a couple of singles while John Legend played piano. Hill also performed her new single, co-written by Legend, “Your The One Whose Waiting” before B.O.B. finished up the song with an original verse.

One name being considered for the show is Live With John Legend. Hopefully Showtime will pick this series up, with the clout John has with heavy hitters in the music industry this show would make great television and great music.