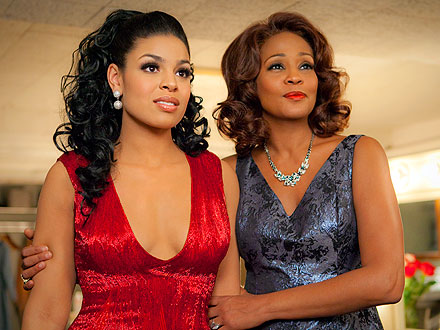 The last songs Whitney Houston recorded will be heard in the film “Sparkle,” one on camera and the other during the closing credits. Houston sings the gospel classic “Eyes on the Sparrow” in the film and duets with Jordin Sparks, the film’s star, on a new R. Kelly song, “Celebrate” over the end credits. The film is in post-production and on schedule; Sony Pictures has it scheduled for release in early August. RCA will release the soundtrack.

Houston recently finished her recording of “Celebrate.” Sony executives were pleased with both the way Houston looks and sounds in the film, according to a person familiar with the production.

“Sparkle” is a remake of the 1976 Irene Cara film.The picture was to be an acting comeback for the singer, who had not appeared in a theatrical release since “The Preacher’s Wife” in 1996.

Houston was also one of five executive producers on the movie, having acquired remake rights in close to 12 years ago. Her original plan was to have Aaliyah star as Sparkle, until the singer died in a plane crash in August 2001.

“Sparkle” is the fictional story of three singing sisters in 1950s Harlem. One of the singers spirals in to drug addiction that leads to her death.

Sparks is the film’s star, Sparkle Williams; Houston plays the sisters’ mother. Cee Lo Green is also in the film.

In her film career – “Sparkle” would have been her fourth appearance on the big screen — Houston stayed close to home with her roles, portraying a pop star in 1992’s “The Bodyguard,” a TV producer in 1995’s “Waiting to Exhale” and a choir mistress in 1996’s “The Preacher’s Wife.”

On Saturday, Sony Pictures released a statement that read “Like all those who knew and loved her, we are shocked and saddened and the world has lost an incomparable talent. Right now our thoughts are with her daughter, her family and her friends.”