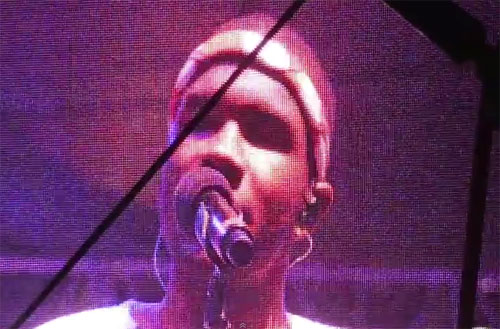 Frank Ocean returned to Coachella for the second weekend, serving up a strong set without the technical difficulties of the previous week. This time, he was backed by a new band including Incubus guitarist Mike Einziger. The Odd Future singer switched up his setlist, surprisingly adding the “Hotel California”-sampled “American Wedding” into the mix.

Just last month, Eagles founder Don Henley reportedly threatened to sue him for his unauthorized use of the 1977 classic. (For his part, Henley denies that any lawsuit has been filed, but the Eagles are considering legal action.)

“I guess if I play it at coachella it’ll cost me a couple hundred racks,” wrote Ocean, who decided to change up the melody when he performed the song live with Einziger in Indio on Friday night. However, the lyrics remained the same.

Check it out below … What do you think of Frank’s live version of “American Wedding”?