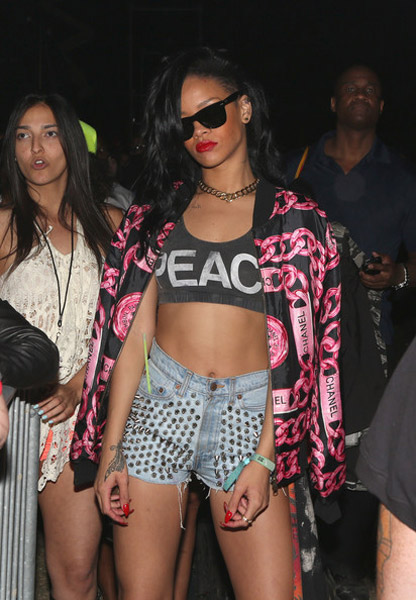 Rihanna lit up the stage and a joint during her fun-filled weekend in the desert. The pop star joined DJ Calvin Harris during his dance-fueled set at the Sahara tent on Sunday. Wearing a cropped tank top that read “Peace” and studded cutoff shorts, the wild child crowd surfed as she performed her Harris-produced hit “We Found Love” and new single “Where Have You Been,” even getting her friend Katy Perry to join in.

“This turned out to be one of the best nights of my life,” tweeted RiRi, who told Harris, “I had so much fun with your fucking fanz tonight! Diz hoodrat $kabii @katyperry also crowd surft n ATE my A$$ during my show.”

After her thrilling show, she perched herself atop the shoulders of a bodyguard while checking out Dr. Dre and Snoop’s epic closer. Following the D-O-Double-G’s lead, she smoked her own stash as she vibed to the West Coast sounds with “Thug Life” written across her stomach and a Chanel jacket on her back.

The Weeknd Brings His XO To Coachella Stage

Behind The Scenes: R. Kelly's "Share My Love" Video Shoot