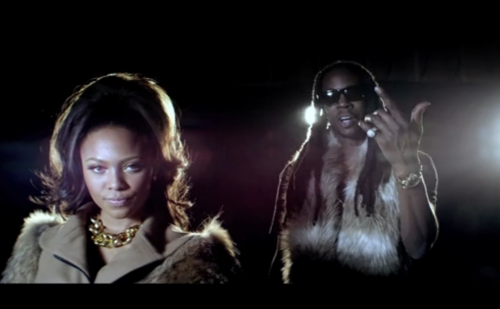 Teairra Mari leaves her inhibitions at the door in the brand new video for “U Did That,” the 2 Chainz-assisted lead single off her sophomore album, Sex on the Radio, due this Summer.

“This is one on my favorite videos that I’ve done for a couple of reasons, starting with the mixture of grit and glam, the fact that the settings are very gritty and dark and I’m still serving glam,” Teairra tells AOL’s The BoomBox of the video, which was shot in Los Angeles.

“Also, I love, love, love seeing myself let loose in the one-on-one dance scene!” she adds. “To top it off, I had a great time shooting the video with my incredible glam squad and 2 Chainz was absolutely amazing!”

The 24-year-old singer, who is signed to songwriter Rico Love’s Division I imprint,  continues to deliver her sexified image, as she shows off her curves in a barely-there outfit and gyrates with a male dancer.

Rico Love, the producer of “U Did That,” supported his artist’s decision to heat things up on set. “I’m such a fan of Teairra and I love the visual for this song,” he states. “I feel like it captures a more mature Teairra. She has a a lot to prove and she’s up for the task. I support her 100 percent.”

Watch the sex-drenched visual below…