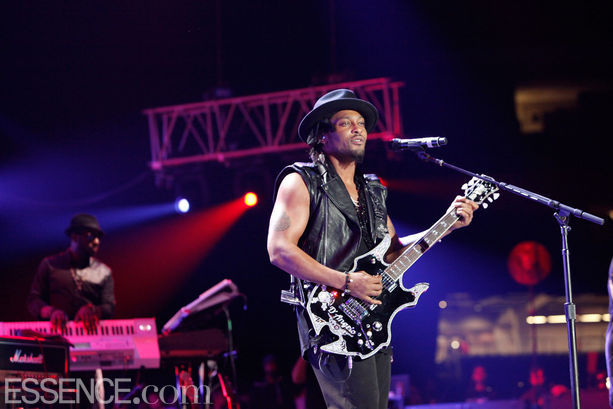 The 2012 ESSENCE Music Festival is in full swing, one of R&B and Soul Music’s biggest events each year, and it has already proven to be one of the most exciting and brightest showings. With the main concert kicking off this past Friday night featuring performances from Trey Songz, Keyshia Cole, the much-anticipated set by D’Angelo and Charlie Wilson, ESSENCE described and accounted the show’s opening night live from the Superdome in New Orleans. Read their review and see photos and video footage below…

Festival goers eagerly filled the Superdome Friday night in New Orleans for day one of the ESSENCE Music Festival, and they weren’t disappointed.

The legendary Pointer Sisters kicked off the show, followed by soulful diva Keyshia Cole, who popped on stage wearing her signature blond locks and a big smile. Cole knows her fan base well, so she instantly brought them to their feet by belting out staple hits from her catalog like “Heaven Sent,” “Love” and “Make Me Over.” She also treated the crowd to the first ever live performance of her brand new single “Enough of No Love.”

After Ms. Cole wrapped her set, Trey’s Angels rose to their feet to welcome their number one guy, Trey Songz, to the stage for his third consecutive EMF performance. He was happy to be back in the building, kicking things off with a string of performances of his fan favorites, including “Neighbors Know My Name,” “Love Faces,” “Invented Sex,” and “I Need A Girl.” He also performed his two most recent singles, “Heart Attack” and “Sex Ain’t Better Than Love.” As a special treat for EMF fans, Trey debuted his brand new single “Dive In,” a sexy slow jam in his signature sultry style. When Trey spotted a super fan in the audience holding a sign that read “I Want Your Shirt,” he called her to the stage screaming, “If you can make it up here, it’s yours.” Of course, she was there in flash, and the smooth crooner made it well worth her while adding in a sweet kiss and tight hug to seal the deal.

The much-anticipated performance of headliner D’Angelo came next – his first major live performance in 10-years. Expecting a big entrance, fans were pleasantly surprised to see D’Angelo casually stroll onto the stage and get right on down to business. The crowd rose to their feet as D’Angelo and his band embarked on one massive soul jam session that showcased his musical evolution and his bluesy blend of rock and soul. He closed out the set at his piano crooning sweet classics “How Does It Feel” and “Lady,” much to the crowd’s delight.

Charlie Wilson, who’s lovingly referred to by his loyal fans as “Uncle Charlie” when he graces the stage, closed out the show in style with another show-stopping performance. Stepping out donning both blue and white sparkle suits and those decked out fedoras he loves, Uncle Charlie performed GAP Band classics, like “Outstanding,” and radio hits, like “You Are” and “I Wanna Be Your Man,” much to the crowd’s delight.

Keyshia Cole – Enough of No Love

D’Angelo – Untitled (How Does It Feel)”

Additional footage of SWV and Marsha Ambrosius live from the Superlounge