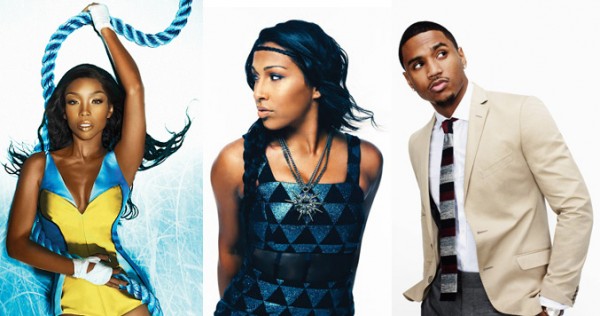 As 2012 comes to a close we love to reflect on all the great music that was released this year. Although there are mixed opinions on if R&B is still a strong genre, one thing is for sure, there was a lot of great R&B music released this year, from many artists helping to keep the genre alive. You know the big singles and probably have some favorite albums cuts, but this list here shines light on 12 songs that you might have missed in 2012. The list is in no particular order… Check out ’12 Great R&B Songs, You Might Have Missed in 2012′ below!

Sisters with Voices, better known as SWV, which includes the members Coko Clemons, Taj George, and LeeLee Lyons, came off a 15 year hiatus and released their new album, I Missed Us, in April of this year. It is no secret that SWV is one of the top R&B girl groups of the ’90s, and they made fans remember on “Show Off.” This song is perfect for the trio as they delivered their signature sound with a catchy chorus. It was great to have them back this year and we hope to see more in 2013!

Singer, songwriter, and VH1 ‘Love & Hip-Hop: Atlanta’ reality star, K. Michelle, had a break out year in 2012. While many were fans of her before, she truly showed why she can compete in this industry this year. The song, “Cant Raise A Man,” was featured on her mixtape, ‘0 F*cks Given,’ from this summer, and it instantly became a fan favorite. K. Michelle is very passionate with her delivery and wants people to be healed through her music. It’s been a while since the industry has had someone this raw. We love it!

Brandy – Wish Your Love Away

Without question, Brandy is in a league of her own when it comes to singing. She returned this year with the new album Two Eleven, that she dedicated to her dear friend and mentor, the late and legendary Whitney Houston. The album as a whole is very solid, and “Wish Your Love Away” proves why Brandy is influential to so many vocalist. From her lower register, to the harmonies, and the acapella at the end, this song is just perfect! Definitely a classic Brandy record.

Elle Varner was a break out star this year, and it’s no surprise if you have listened to her debut album, Perfectly Imperfect. This song is a fan favorite off of the album as Varner showcases her vulnerability. The whole vibe of the song is real reminiscent of the ’90s.

Melanie Fiona – Break Down These Walls

Melanie Fiona released her album, The MF Life, earlier this year, and it was no shock that she was going to have some great songs. “Break Down These Walls” in particular, is an immediate stand out. There is no way anyone can deny this woman’s talent.

Trey Songz – Without A Woman

This song here deserves all 10’s across the board. The Eric Hudson & Troy Taylor produced track is off Trey Songz latest album from this year, Chapter V, and he showcased vocals that many didn’t know he had. Songz, without a doubt is a hard worker in the business, and it was great to hear him sing his heart out on this record. It would be nice to see this pushed as a single.

Avant feat. Keke Wyatt – You and I

Avant and Keke Wyatt are known for great chemistry in past duets, and this new offering from was no different. Avant is scheduled to release his new album Face the Music in February, and Keke is currently at cast member on the reality show ‘R&B Divas.’ Hopefully there will be more duets to come because they definitely deliver that R&B sound that fans love.

This song here is why Monica is a veteran in the game. With songs like this, there is no way that R&B will ever die. Monica delivers flawless vocals while singing about wanting to fall in love. Just one listen of this song and you’ll be ready to go on a few dates to find your Mr. or Mrs. Right!

While fans waited awhile for Tamia to release a new album, it was worth it. This uptempo song from the songstress was a nice offering, and a perfect song to open her album with. Tamia is great for her ballads and has a voice of an angel, it was nice to hear her let loose on a record while still staying true to her sound.

Brandon Hines – Yes You Are

Newcomer, Brandon Hines, released this song earlier this year and it fell under the radar. This song was a great offering from Hines, and hopefully there will be more shine coming his way, because he is more than deserving. There are many male R&B singers out here, but the potential of Brandon Hines is high.

Although this year was quiet for Mario, he meant every note he was singing on this song! With his smooth vocals and clear falsetto this record is perfect to show your love to that special someone. Not sure what Mario’s plans are for the new year, but if there are any more songs where this came from, a new album is in high demand.

Emeli Sande – My Kind of Love

Emeli Sande has somehow gone mostly unnoticed in the US. The Scottish singer-songwriter released her debut album Our Version of Events to critical and commercial success in the UK, early in the year, but had a very luke warm debut in the States this past Summer. Lifted as the fourth single off the project, “My Kind of Love,” is a powerful, R&B rooted ballad, with incredible emotion and a stunning vocal performance from Sande. With writing credits for Alicia Keys and Rihanna on her resume now, let’s hope the mainstream catches up to this rising star.

Have a favorite that wasn’t mentioned? Tell us in the comments section…