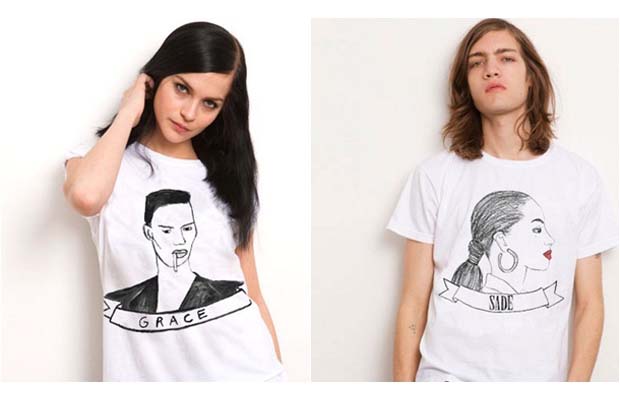 Over his short career in the public eye Miguel has been known for his edgy, unique fashion style. Though questionable early on, during the most recent era of his sophomore album Kaleidoscope Dream, the singer-songwriter really came into-his-own, with a perfect balance of creative, forward but contemporary, yet still masculine style. You might have seen him wearing one of these tees before, but Miguel has partnered with designers Dana Veraldi and Kevin Tekinel of Deer Dana for his first clothing collaboration of custom tees.

His first designs contributions are illustrations of female icons, Grace Jones and Sade. Deer Dana has become known for their basic illustrated image tees of artists such as Kanye West, Jean-Michel Basquiat and icons like Steve Jobs and or President Barack Obama. The shirts are available at limited numbers on Deer Dana, and at Opening Ceremony stores in Los Angeles and New York City. A portion of the sales proceeds will support the Precious Dreams Foundation, a nonprofit organization that supports foster children.

Miguel had an amazing 2012, releasing his critically acclaimed album, Kaleidoscope Dream, and hit single “Adorn,” both of which have lead him to multiple Grammy nominations including, Best R&B Song, Song of the Year, Best R&B Performance and Best Urban Contemporary Album. The award show airs Sunday, February 10th.