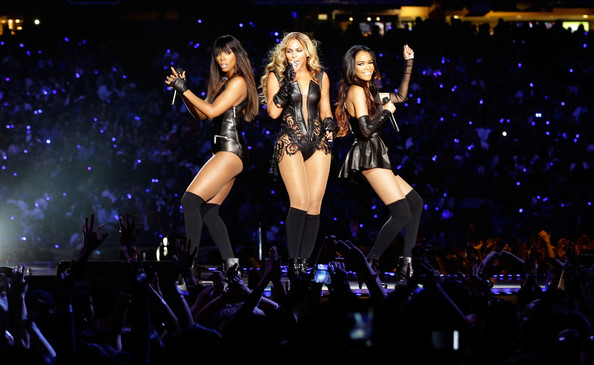 However you felt about Michelle Williams performance at the Super Bowl halftime show, doesn’t matter, because she is Destiny’s Child. The singer recently spoke with Billboard about the DC reunion, her upcoming solo album and touring with Fela!

Williams has been buzzing about the ladies performance since Sunday, brushing off any online comments that she didn’t seem happy on stage.

“Oh, the Super Bowl was beautiful,” Williams told Billboard, adding that preparations for the segment were full of horsing around that drove the choreographer and creative director crazy.

“When three good girlfriends are together, you’re free and you don’t care who’s around; you’re just trying to catch up and be goofy. I had a blast. People at home watching… they don’t catch the moments where, like in the ‘Charlie’s Angels’ pose, I was smiling. We were all smiling. I was laughing with my girls. I don’t care what anybody else says. I don’t let it get me down. It was a beautiful thing.”

Williams addressed her previous dismissals of the possible reunion when asked in an interview leading up to the Super Bowl. “I was just trying to protect the integrity of Beyonce’s show,” she explains. “She really wanted it to be a surprise. Had I not had to promote ‘Fela!,’ I would not have had to answer those questions. So when people said, ‘Hey, Michelle, is it going to happen?’ I wasn’t going to say ‘yes.’ It wasn’t my show. (Beyonce) didn’t want anybody to know.”

Williams says she’d “do it again in a minute” with Destiny’s Child. So, will the trio do it again. “Who knows,” she answers. “It’s a possibility. I think this was a good moment, and it felt good for all of us and you definitely want those moments again.”

The group had their own reunion moment late last year, when they reunited in the studio for the first time in eight years to record “Nuclear” for their new compilation, Love Songs, which is out now.

“We had to hurry up and get it done, but it was fun,” says Williams, who co-wrote the Pharrell Williams-produced track. “Layering our vocals on top of each other again, we were like, ‘Oh my God…!’ Beyonce was like, ‘Man, we sound good together,’ and I was like, ‘Du-uh!’ That’s what we do.”

On to the next one though. Michelle is also finishing up her fourth solo album, her first since 2008. The set, which is due later this year, is “about 80 percent done,” says Williams. It is primarily produced by Harmony Samuels (Chris Brown, Jennifer Hudson, Kelly Rowland) as well as Warren Campbell and Adam Blackstone.

“It’s an inspirational/gospel project,” she reports, “but it sounds like an R&B/pop album. Harmony gave me the same tracks he would give to, like, Chris Brown and Kelly Rowland. Sometimes when you say you’re doing a gospel album, it seems like people go back to their vaults of music they did in 1992, and I’m like, ‘No, give me fresh-sounding music.’ So this (album) sounds very current and contemporary.” Williams adds that she’ll have “some surprise features” on the album but isn’t revealing those yet.

Behind The Scenes: Melanie Fiona "Wrong Side of a Love Song" Video