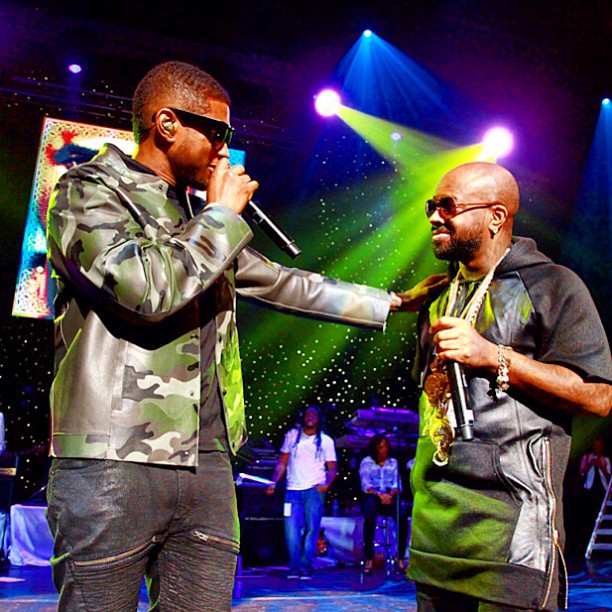 Music history was made in Atlanta last night, as Jermaine Dupri pulled off an epic concert at the Fox Theatre to celebrate So So Def’s 20th Anniversary. The stage was like a “who’s who” in chart-topping acts, as everyone from Jay-Z, Mariah Carey, Usher, Ludacris, Young Jeezy, Nelly, Lil Jon, Monica, Kris Kross, Bow Wow, Anthony Hamilton, Da Brat, Jagged Edge, Xscape (Latocha and Tamika Scott), T-Pain, Lil Scrappy, Youngbloodz, Bonecrusher, Dem Franchize Boyz, J-Kwon, Dondria, and Pastor Troy took the sold-out crowd on a musical trip down memory lane. The Fox Theatre was alive with the sounds of classic songs like “Money Ain’t a Thang” (JD & Jay-Z), “Jump” (Kris Kross), “Yeah” (Usher, Ludacris, Lil Jon), “Who Can I Run To” (Xscape), “I Gotta Be” (Jagged Edge), “Welcome to Atlanta” (JD, Ludacris), “Give It 2 U” (Da Brat), “I Think They Like Me” (Dem Franchize Boyz), “Coming From Where I’m From” (Anthony Hamilton) and so many more!

“I’ve made more hits with this man than anyone else,” said Usher, acknowledging Dupri on stage. “Congratulations to my friend, JD!” said Mariah, as she wheeled out a cake at the end of the show.

Overwhelmed by the energy of the crowd and the support and well-wishes of his celebrity friends, Dupri was humbled: “Wow…this is crazy,” he said. “We did it! Thank you everyone – the fans, the artists..ain’t nobody f’in with my clique!”

See photos and video below…

Monica – Love All Over Me

Verse Simmonds Talks About His Tattoos with DJ Smallz