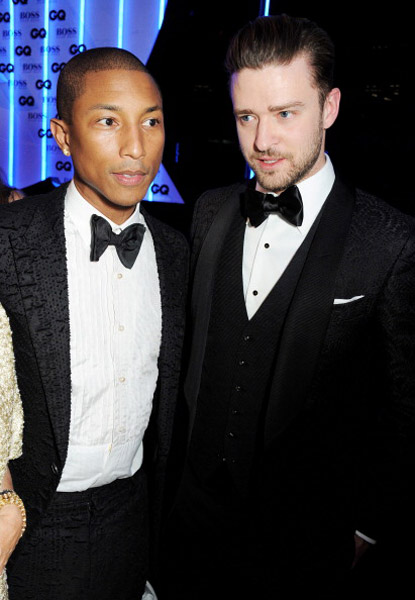 During his chat with the Kiss FM morning show in London this week, Justin Timberlake surprisingly revealed the possibility of a full fledged collaboration between himself, Pharrell Williams and Timbaland. As you should know, Pharrell was heavily behind JT’s first solo album ‘Justified,’ but they have not worked since, after he found such great chemistry with Timbaland on ‘FutureSex LoveSounds‘ and this year’s ‘The 20/20 Experience.’

When asked if he had plans to ever work with Pharrell again, Justin basically spoke the collaboration into existence.

“I don’t want to jump the gun here because I don’t know what it’s going to turn into, but there is a potential Pharrell, Timbaland, me record … but we will have to see, it’s up to those guys,” revealed Justin. “I think the future is bright for me and Pharrell to get back in the room.”

The two hitmakers also hung out and celebrated together at the GQ ‘Men of the Year Awards‘ also in the UK.  Late Thursday night, Justin released the new single “TKO,” the second release off the second half of ‘The 20/20 Experience,’ which hits stores on September 30. Take a listen to the interview below: