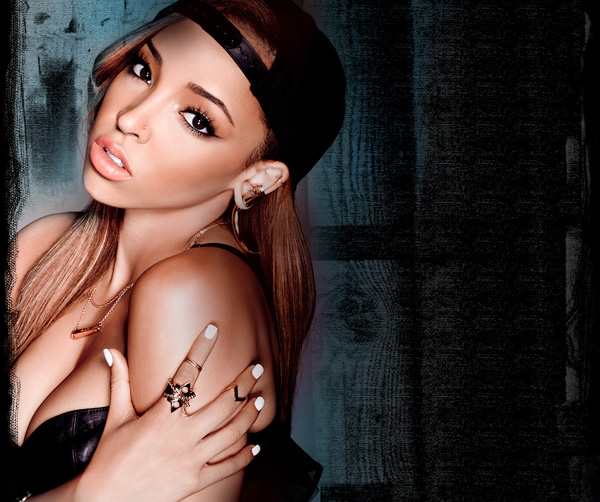 R&B has a tendency to bring you to a point where you can literally forget everything that’s going on around you, as you relate to the words blaring through your speakers. Whether it’s that infamous women empowerment single that you love or that cut that takes you back to heartbreak hotel, R&B can bring out your best and worst memories and feelings. For some artists though, it’s difficult for them to be well-rounded and versatile with their topics. If they can sing well about being heartbroken, it’s often difficult to hear them sing about being happy and vice versa.

One new artist on our radar, who is clearly able to evoke every emotion in her singing, is burgeoning L.A. native and RCA Records signee, Tinashe. While she’s only a mere 21 years in age, the beautiful singer has talent that expands past most of her older counterparts. Singer, songwriter, producer and creative visionary, this young lady has us on the edge of our seats anticipating her debut album that is due out this year.

Releasing her mixtape, Black Water, in late 2013, Tinashe gave fans a variety of feelings, sounds and material, while keeping us interested the whole time. Recently releasing her lead single “2 On” featuring fellow Cali artist, Schoolboy Q, the Zimbabwean descendent is gaining quite the name for herself as she turns up with the big boys. Putting her tedious schedule on pause to speak with us, the eccentric singer let us in on some pretty exclusive info. Giving us a taste of her creative process, Tinashe spoke with us about her upcoming debut album, the development of her new single, “2 On”, what the perfect date for Valentine’s Day would be for her and much, more more!

Jump into the exclusive interview below!

Tell me about your thought process behind creating your latest mixtape ‘Black Water.’ Was there a specific concept you chose to run with?

Well, my reasoning for doing it in the first place was just because I’ve been working on my debut album for all of 2013, so I just wanted to give my fans something to listen to before my album came out. I knew that towards the end of the year that I really wasn’t ready yet to put it out because I’m a real perfectionist. As it being my debut album, I really want to make sure that I take my time and all the songs sound right and everything so, I was very excited to make the mixtape. I really wanted it to represent the period of time that I was going through, kind of in my life waiting for things to happen – kinda the calm before the storm, I guess. So, that’s pretty much the inspiration behind it.

We have our favorites on the mixtape including the lead song, “Vulnerable”, but we’re really feeling the record “Just a Taste”. Being that it comes from a sample of the classic Tony! Toni! Tone! song “Anniversary,” were they an influence on you throughout the years?

Yeah! I think growing up, my parents always played a lot of 90’s R&B in the house so I listened to a lot of their music and other artists like Sade and Janet Jackson and Michael Jackson. Those have been really big influence I think on me, my taste in music and just the stuff that I want to incorporate in my own music.

What other artists played a part in influencing you?

Janet Jackson, Michael Jackson…Christina Aguilera was a big vocal inspiration for me growing up. Um, Sade…those are probably the big ones for me.

Do you have any dream production collaborations?

Yeah! I would love to work with Sade and I’d also love to work with James Blake. Maybe a band like Little Dragon because I think that they’re awesome. I just wanna do some fun stuff and being able to explore and experiment so, I’m looking forward to doing that in the future.

Your new track, “2 On” features Schoolboy Q. I personally love it – I listen to it at least twice a day. Tell us a little bit about the process behind that.

Thank you! Well, for this single, I really wanted it to be something that had a fun vibe and then represented kind of like a West Coast swag. I had the song – it was produced by DJ Mustard and Red Wine – and then I got Schoolboy Q who is one of my favorite West Coast rappers. So, him being from L.A., I thought it would be perfect for the song and yeah…that’s basically how it came together. I just wanted to write a song that was kind of about just living life to the fullest, having fun and going hard. You know, stuff like that.

Although this is my favorite track, I’m still a little lost on what exactly “2 On” means. Can you break that down for me and tell me what it means? [Laughs]

[Laughs] Sure! Yeah, 2 On is basically like when you’re like too turnt up. It’s like being extra at just like whatever you’re doing. If you’re just extra happy or if you’re extra hype or a little too buzzed, it just represents that feeling of just being all the way turnt – at 110.

Now I know! Now I can actually explain it to people if they ask me [laughs]. So, we’re supposed to be getting this new album from you this year, correct?

Do you have any idea of an anticipated release date and is “2 On” the official lead single from the album?

Yeah, “2 On” is the first official single, but I don’t know when the album release date is yet.

Can we expect any collaborations on this album?

Yeah, definitely. I have a couple more, but I haven’t really released who those are yet. It’s still a secret – it’s a surprise [laughs].

Well, we’ll definitely be waiting on it. Switching gears really quick – we watched this couch interview you did a while back on your YouTube channel. It seemed a little creepy to us. Was that the intention of the interview?

Well, I think that interview is part of an art piece that’s supposed to coincide with a music video to “Vulnerable”, but it’s basically supposed to represent the feeling of being vulnerable and making people uncomfortable. So, I guess we accomplished that [laughs].

[Laughs]. Yes, yes you did. It made me a little uncomfortable – it really did. So, there seems to be a really big R&B movement coming out of Cali right now. What is it like for you to see other artists coming out of L.A. and the Bay Area and for you to be apart of it? Furthermore, where do you see this movement going?

I think there’s a lot of extremely talented artists coming out of L.A. right now and just  the west coast. I think it’s exciting and people are ready for some fresh blood in the entertainment industry in general. So, it’s exciting that all of these artists who are kinda new are coming up.

We know that you write and co-produce a lot of your own music. Take us back to your earliest memory playing around with music or picking it up? What was your first sound recording like?

Um, yeah…I’ve been singing for like my entire life – as long as I can remember. The first like official, official song I remember writing, I was five-years-old and it was called “Deep In The Night” and I sang it at like a piano recital that I had for an audience. So, that was fun – I have it on video.

Last year was really a strong year overall of R&B. What albums were on your radar in 2013 and what artists or albums are you looking forward to getting this year?

Probably my favorite album from 2013 that I listened to was Disclosure’s album. I really liked Drake’s album that came out and yeah, I think I really liked a lot of the music that came out last year. I’m excited for this year because there’s a lot of anticipated music. I’m really looking forward to [Schoolboy] Q’s new album, Oxymoron, that comes out in I think February. That’s the top of my list.

When you’re not singing, what do you prefer to do?

I really like to just create things so I spend a lot of my time being creative. Whether it be shooting videos or creating beats or creating songs or just painting or just making things – that’s what I like to do in my spare time. I just like to create things.

So with this new album coming out sometime this year, what do you really want fans to take from it?

I really want them to just get to know me as an artist and really establish who I am and that I’m just kind of somebody that they can look out for in this industry. I don’t want them just to think that I’m somebody that will just come and go, because I plan to stick around for a really long time and do a lot of things. I have a lot of goals and ambitions that I have yet to accomplish.

Is there any advice that you could give to someone taking a road similar to yours?

I think one of the best pieces of advice I could give to people is to be active on social media and to get yourself out there any way you can. Whether it be to post videos or to go ahead and make your own songs, just don’t wait for people to do it for you. You can initiate things and you can learn how to record your own music. Make your own content on your own with YouTube and stuff like that. So definitely, just go out there and put yourself in the public eye.

Now, Valentine’s Day is a little under a month away. What is the prefect date like for you?

Oooo…I would like to do something unexpected – maybe something physical or active. You know, I like to work out and stay active, so it would be cool to go on a hike somewhere awesome or do something fun like that. Going canoeing or something like that would be really fun. Maybe going to the beach and then having a nice dinner. I really like to go dancing so we could definitely always go dancing.

Lastly, if you could interview anyone, who would it be and why?

I would really like to interview my grandfather who passed away when I was like six-years old. He was from Zimbabwe and I never really had a full conversation with him because I was so young when he was alive.  I mean, I suppose I talked to him a lot, but I don’t remember asking him things about his life. It would be interesting I think to hear about his perspective of his life and just speak with him again. That would be awesome.

For more info on Tinashe check her out www.tinashenow.com and follow her @Tinashe.