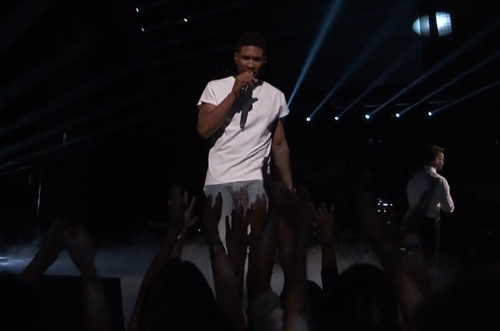 Helping to kick off the show, the R&B star joined his team member Josh Kaufman for a duet cover of the Police’s classic ballad “Every Breath You Take.”

Later on, the singer, who just released his comeback single “Good Kisser,” treated the audience to a special duet performance with fellow coach Adam Levine. The two stars collaborated on a unique cover of D’Angelo’s fan favorite song “Untitled (How Does It Feel).”

With Adam on the opening guitar riff, Usher quickly joined in with an incredibly smooth falsetto handling the songs many vocal inflections effortlessly. Later they quickly battled with high notes. This was one not to miss.

Catch both performances after the jump!

New Music: Mariah Carey feat. Wale - You Don't Know What To Do (CDQ)