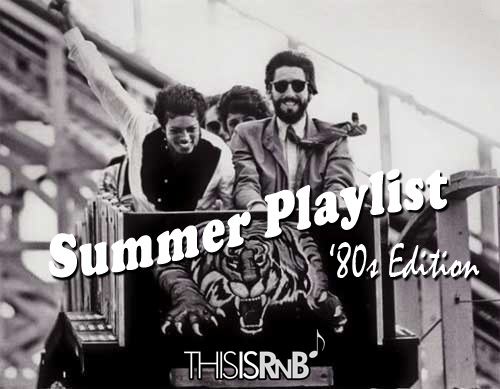 When we think of ‘80s R&B we think of legendary artists like Michael Jackson, Prince, Stevie Wonder, Whitney Houston and so many other influential acts from that golden era. You hear groundbreaking mixes of Funk bass lines, Disco beats, revolutionary creations with Hip-Hop and Soul, which all came together giving Rhythm and Blues a more danceable and contemporary sound.

Today, so many people question the stance of R&B and the direction that it’s going in. As we’ve learned nothing stays the same in this ever-evolving industry. So, to help you remember some of the best feel-good R&B of the past we’re taking you back with our 1980’s edition summer playlist!

Ready to kick off your shoes, get out your seat and boogie on down?

Then get into the ThisisRnB Summer Playlist (’80s Edition) below!

George Benson – Give Me The Night

The title track from Benson’s 1980 album, produced by Quincy Jones and written by Rod Temperton. The song was a huge commercial success, becoming Benson’s first single to hit No. 1 on the U.S. Billboard R&B chart. It also peaked at No. 4 on the Billboard Hot 100.

Michael Jackson – Off The Wall

The third single, and title track from Michael’s groundbreaking fifth solo album and first on Epic Records. The song peaked at No. 10 on the Pop Singles chart and at No. 5 on the Billboard Soul Singles chart. To this day it is still one of Michael’s most popular club songs.

Stevie Wonder – Do I Do

As one of four new tracks from Wonder’s 1982 compilation album, Stevie Wonder’s Original Musiquarium, the single peaked at No. 2 on the Black Singles chart, No. 1 on the Hot Dance Club Play and No. 13 on the Billboard Hot 100. The full version of the song is ten and a half minutes long and features a rare example of Stevie Wonder rapping near the end of the track. Dizzy Gillespie is also featured on the track with a trumpet solo, but both parts were removed on the single version.

Released as their first single, The S.O.S. Band reached the No. 1 spot on the R&B singles chart and No. 3 on the Pop chart during the summer of 1980. It also ruled the Dance chart at No. 1 for four non-consecutive weeks. The record was certified multi-platinum by the RIAA selling over two million copies.

Released in 1982 from the groups platinum-selling album Gap Band IV. It is one of their signature records and biggest hits, grasping the No. 1 spot on the U.S. R&B Singles chart. The record also peaked at No. 51 on the Billboard Hot 100.