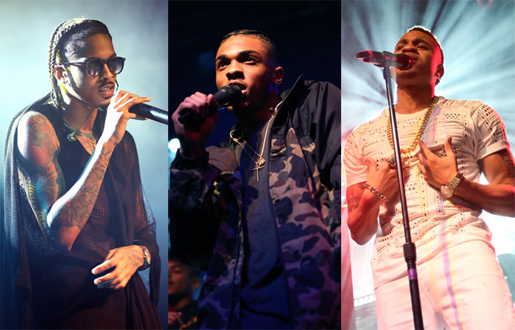 On Sunday night (Aug. 13), August Alsina triumphantly returned to the very stage in New York City where he frightening collapsed on his “Testimony Live Tour” in 2014.

Returning to Irving Plaza for the NYC stop on his comeback “Don’t Matter Tour,” the R&B star was fully embraced and supported by a packed house of dedicated fans. Only months after publicly revealing his health problems in an emotional interview with Jada Pinkett-Smith, the 24-year-old appeared to be in his prime, at the top of his game.

However, before he hit the stage the crowd was treated to a double dose of hot new R&B talent from the likes of singer/actor Rotimi, and buzzing young singer/songwriter Tone Stith. Both New Jersey natives, Rotimi kicked off the night with a commanding and sexy performance of his new music. He even surprised the audience by bringing out Dancehall star Kranium for their new single “Want More.”  With the crowd fully hyped, Tone Stith took to the stage like a seasoned all-star, backed by a troupe of dancers and musicians. In a perfectly executed 30-minute set he showcased his multiple talents, starting with his fancy footwork, outstanding voice and musicianship on the guitar. Tone Stith surely cultivated a nice new following with his raw talents this night.

In the evening’s most somber moment, August paid tribute to his older brother who passed away due to violence. He also took the crowd to church with a special rendition of “Hallelujah.” As every female in the building screamed their love for him, Alsina closed out his set with the fan-favorite, “Kissin On My Tattoos,” followed by a riveting twerk-a-thon from his dancers.

Exclusive: 'Unsung' Producer Jamecia Blount Takes Us Behind The Series and Her Journey As A TV Producer

The Weeknd Drops Trailer for ‘Legend of the Fall Tour: Phase II’