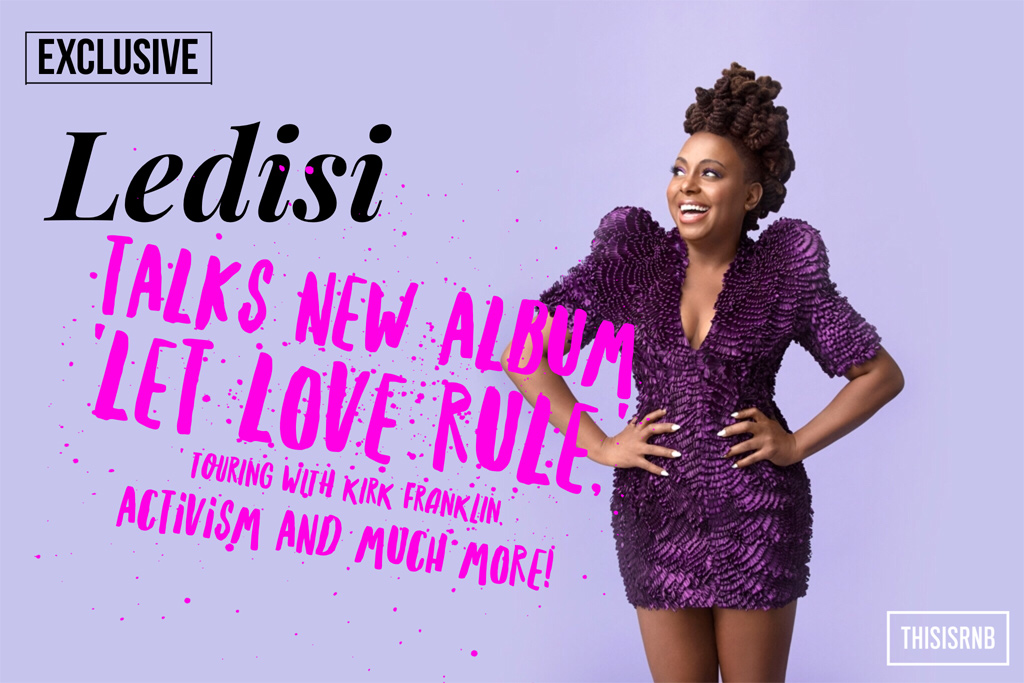 Classy mixed with a bit of grit is why Ledisi reigns as an R&B goddess. Her latest album Let Love Rule is a melodic collage of smooth jazz, funk and soul. It’s not unlike her past releases, yet it represents her evolution. With nine studio albums in her repertoire and solid acting roles, she’s earned the right to be a diva, but she’s exudes humility. A true maven of sophistication, she acknowledges her Bay Area upbringing, with southern roots that made her.

“It’s a classic way of holding myself. It’s New Orleans thing, we like to be a certain kind of way,” she explained to ThisisRnB’s Rocki during a recent candid interview. “Being from New Orleans and loving jazz—that style of music—that’s just always been a part of my make up. I’m raised in Oakland, but from New Orleans.”

The Grammy award-nominated singer/songwriter/actress is currently sharing the stage with Kirk Franklin on The Rebel, The Soul & The Saint tour. The 22 city event will offer a wide appeal. “I wanted a concert where everybody can come; not just church folk; not just R&B folk–all folk,” she said. “Somebody might have brown liquor, somebody might have coke, either way, we’re all in that room together.”

Peep what else Ledisi had to say about her new album, whether she views herself as an industry veteran, how she uses her platform for activism and much more below.

TIRNB: First of all, let me say, you are totally snatched on that album cover. Are you on Kanye’s workout plan?

LEDISI: I’m doing my best. No, I’m not on any workout plan. It’s just being healthy and alive. You know the older you get, you have to be careful.

Well you are definitely looking fabulous and your voice sounds amazing. I really love how you have evolved as an artist. You have like nine studio albums. You’re going on almost 20 years in the game, you can say you’re a vet.

Yup, I’ve been around a long time. Everybody started at Pieces of Me or Lost and Found, but they don’t know, I’ve been doing this awhile now. I don’t know about that [being a vet], it keeps changing; so you have to change with it.

Thank you. I really want to make sure we had a varied experience on the album. We don’t have all old stuff; we have some new stuff too. Old school music and new school, I always mix it up on every album. It’s not just one thing, I’ve never been one style.

Tell me more about your New Orleans roots, the passion of the city and how it’s given us so many amazing singers and musicians.

You got Irma Thomas, you got Trombone Shorty, originally Beyoncé’s family is from there too. To me, everything comes from New Orleans if you love jazz which influenced hip-hop music. It all migrates from that one style and one vibrancy. I love my city. I love what we represent. I love that we do what we do. You always see us mixing genres; mixing old and new, and classic and colorful. This is a beautiful place to be from.

I also appreciate my Oakland part because it’s helped me understand funk and gospel even more. We do what we feel. We do what we love and what comes natural, and that’s what I mainly appreciate about coming from New Orleans. A lot of other places are competitive. We know we’re incredible; we don’t compete.

That’s part of what I love about you. I know you as my Aries soul sister will keep it 100. We have to be authentic. That’s why I love “Add To Me.”  Like, what are you gon’ do for me? Don’t come draggin’ me down.

You should’ve saw me in the studio, I acted up so bad on that song, they were laughing at me. Anybody that comes into my world, I wanna know that they’re adding to my life. Not necessarily monetarily, but just in all ways, emotionally, making me look good, just everything. Add to my situation, not take away, ’cause I know I’m gon’ add to yours.

Tell me about the creative process for Let Love Rule.

I wanted to make sure I talked about love and today’s kind of love. The world love, a relationship love, the need for love, the breaking up of love and the getting back together, and the power of God’s love. The common theme of any classic R&B album is always about love. It wasn’t a planned thing, we just went along with how we felt. Rex Rideout is my executive producer, we’ve been working together since Lost and Found. He has worked on all my projects.

Are there other producers who worked on the album?

Oh yes, Ivan Barias who did “Forgiveness.” I worked with DJ Khalil, who did “Shot Down.” Ivan Barias did Musiq Soulchild and a lot of people from Philadelphia. DJ Khalil did Aloe Blacc and Kendrick Lamar. Jeff Gitelman and I also worked with Biscuit and Butter who did the title track, “Let Love Rule.” There are a lot more.

My favorite track is “Us 4ever” with BJ The Chicago Kid. I think he is a phenomenal artist. He has natural talent, he’s really about touching souls. I like how your voices blend on that. It sounds like a natural chemistry. It’s giving me a 90’s duet vibe.

What’s funny is, we didn’t record together. It just matched perfectly. Rex Rideout, my producer, he and I wrote that with Jairus Mozee, the guitarist that played on that. I wanted the male perspective, so it had balance. When you have people who have the same energy with R&B music, it just naturally works.  I love the lyrics. I love the honesty in that song. When we were writing it, we were talking about how dysfunctional relationships are and that you have to choose to make it better. You choose the person to be in love with. You choose to keep working on it. It’s hard being in relationships; they’re not perfect, and I love that we express that in the song. I love that we’re not perfect, and we don’t agree on everything, but I love you, that’s why I’m putting up with you.

One other thing I really liked are the interludes. Iyanla [Vanzant] gets everybody’s life together. What made you pick her and Soledad O’Brien for those interludes? They were pivotal in bringing the album together.

That was my idea. I’m a political nerd and I’m also very spiritual and they are big fans of my music. I reached out and asked if they would do some speaking and answer some questions that I had. They are voices that people pay attention to and they’re incredible women, and I wanted to highlight them.

As a political nerd, how do you decide which messages you’re going to put out here? How do you use your platform to convey how you’re feelings about what’s happening in the world?

Well you can’t force people to do what you want them to do. That’s the wonderful thing about being in America; we all have our opinions. We don’t have to necessarily agree. But the line that keeps getting crossed is respect. That’s the part that I get upset about, is the respect of space; the respect of human life. We don’t have to agree, but respect my space, respect me, respect my rights. That’s what’s important and we have to pay attention when those rights are taken away. We have to be active.

And you don’t have to be active in a loud way. You can be active in a silent way. I know some great people who have moved quietly in the background and you didn’t know they were making stuff happen. There’s different ways you can do things and get stuff done to change the world. I always lobby for musicians; I lobby for performing arts ’cause I always think about when I was little all these music programs I was involved in, I got to do those for free. Someone donated so I could go to school and learn classical music and learn how to play piano and all those things that weren’t all given to me freely. Some of those places, I had to get a scholarship. So I lobby for those programs to stay around because there’s another little Ledisi, like me.

I decide what I wanna say to change the world, but I can’t force you.  Like even on “Shot Down,” the music’s still good, but what I’m saying is deep. I sneak things in. I sneak in my spirituality; I sneak in my political thinking and maybe it’ll inspire you to do things different. I can’t force you, but what I can do is be an example of that. We definitely need to educate ourselves more. I put it in my songs. I put it in my language.  I go up to the senate and beg for them to make laws change. Other people sit at home, on Twitter and Facebook and rant about it. So what are you doing?

Kids need something else besides sports. It’s proven that when kids learn about music, their math gets better. People complain about the music today, well, they don’t have music programs in schools, now. Those are the things I’m lobbying for, and musicians getting equal pay. Streaming; a lot of stuff we don’t get paid for. It’s hard to make a living with just doing music. That’s why people do different styles of music … or they go and do acting. We have to make sure musicians get paid for their livelihood.

What can fans expect from the “The Rebel, The Soul & The Saint” tour?

I came up with a name that we can all fit under and have people about all walks of life just come to a show and enjoy it. Somebody might have brown liquor, somebody might have coke, either way, we’re all in that room together. I’m going to do a few songs from Let Love Rule and I’m gonna do a few songs from my old catalog and I’m gonna do a few of Kirk’s songs as well; we’re gonna mix it up.