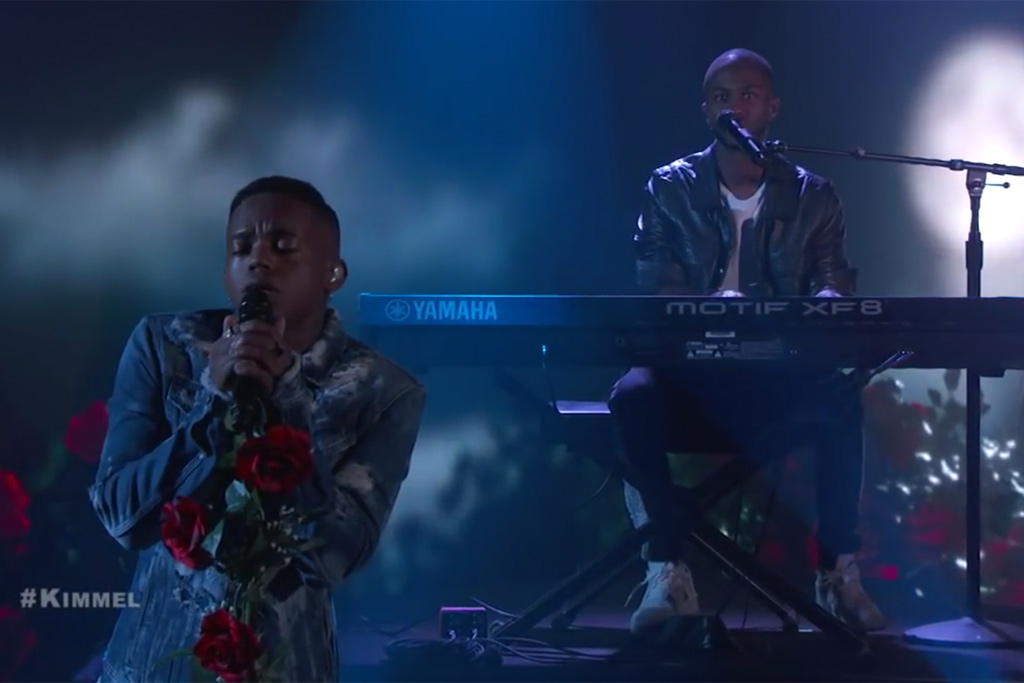 THEY., the alternative R&B and Hip Hop duo consisting of Dante Jones and Drew Love, were blessed with the opportunity to perform on “Jimmy Kimmel Live!” on Friday night.

The group opened their studio stage set with the hyped-up anthem “U Rite” off their debut album Nu-Religion: Hyena. The guitar-heavy rap track had everyone rocking out as they jumped around on stage. However, for their second song the Los Angeles based artists slowed it down with Drew taking center stage at a rose covered microphone.

Setting the scene for a much more subtle, emotional performance, THEY. had the audience swaying side to side with the smooth single “Dante’s Creek,” which borrows the famous line from Paula Cole’s “I Don’t Want to Wait” — the theme song to ’90s teen drama “Dawsin’s Creek.”

“I don’t wanna wait for our lives to be over,” sings Drew. “If it happened now, would you take it how you left it? / It’s a give and take, so take your time, take me under / I wanna know, could you show me what I’m missing?”

Previously speaking with Genius” rel=”noopener” target=”_blank”>Genius, Dante Jones explained how the duo ended up flipping Cole’s track. “We were working with Timbaland, and I think it was like the third day we were working with him. And eventually I think he just like ran out of beats or whatever. We didn’t hear from him for like 4 or 5 hours. We got stuck and I just yelled out the Dawson’s Creek theme song like, ‘Yo that’s actually kinda tight.’ … Paula Cole definitely showed a lot of love. Like she cleared the song, let us use the line. So like yeah, thank you Paula.”

Check out their performance below.