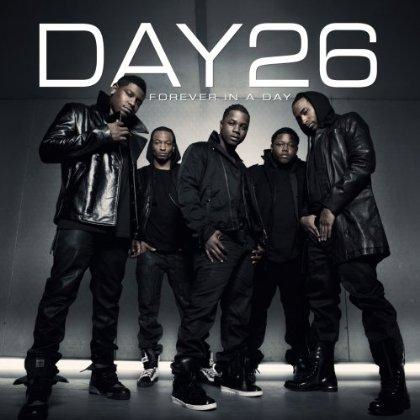 Day 26 is ready for fans to hear the anticipated sophomore disc Forever In A Day, because it is according Robert – ‘”Ridiculous”.

Forever In A Day, the Making the Band 4 group’s new album, will not only pick up where the group left off on their self titled debut, the effort will also find the group members rocking the club till the walls come down. In fact, Day 26 is already bumping clubs from east to west coast with the first single “Imma Put It On Her” feat.  Yung Joc and Diddy.

The blazing club/dance record is, according to group members, just the beginning of what promises to be a new era for Day 26.

“While recording our first album and putting it out, we realized we didn’t cater to the club as much as we needed to,” Will Taylor told MTV. “So this album, we’re just dedicated to tearing the club waqlls down. The album is going to be ridiculous. We’re going to show you the true Day26.”

Unlike their debut album, which features very few collaborative efforts, Forever In A Day boasts songs with The-Dream, Jermaine Dupri, Cassie and Mario Winans, in addition to Diddy and Yung Joc.

Forever In A Day is slated for release April 14 via Bad Boy.

Chris Brown Due In Court Today