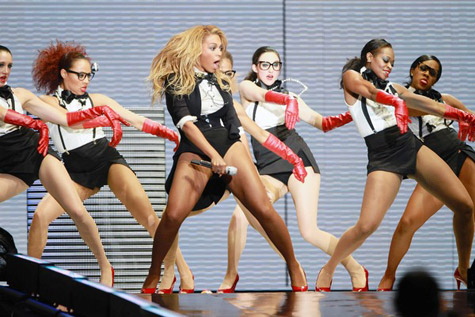 Oprah’s closest celebrity friends gathered under one roof at Chicago’s United Center for “Surprise Oprah! A Farewell Spectacular,” a star-studded send-off to the talk show queen. Everyone from Madonna to Halle Berry was in the building to honor Oprah’s 25th and final season, and the waterworks were in full effect.

Beyoncé kicked off the festivities in a tuxedo leotard with around 40 female dancers to perform her single “Run the World (Girls)” for the first time. According to the Chicago Tribune, the singer received the loudest applause not counting Oprah. The crowd held up blue lights in the arena as she ran through the number twice while the guest of honor danced along.

For the second act, Alicia Keys accompanied Dr. Maya Angelou on piano as she recited a poem about Oprah. Then Oprah’s longtime love Stedman Graham took the stage to introduce the legendary Aretha Franklin who brought O to tears with her stirring rendition of “Amazing Grace.”

Power couple Will Smith and Jada Pinkett Smith showered praise on the media mogul before introducing Jamie Foxx, who sang “Isn’t She Lovely” with Stevie Wonder on piano. Usher capped the evening on a high note with the gospel standard “Oh Happy Day,” bringing out a choir as the show’s other guests joined them for one final sing along.

Oprah’s teary-eyed farewell special airs May 23 and 24. Have your Kleenex handy.

KERI HILSON COVERS WHITNEY HOUSTON'S "I HAVE NOTHING"