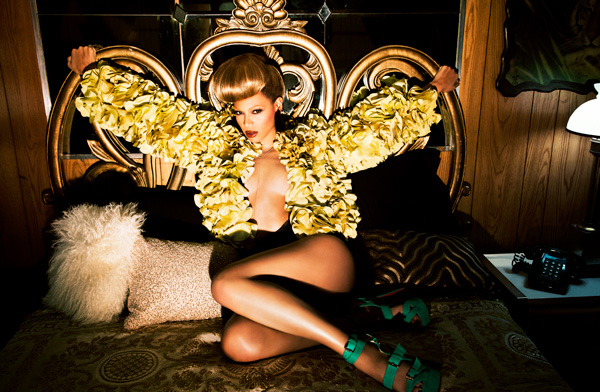 Billboard recently spoke with Beyonce’s go-to engineer for an exclusive interview. During their chat the Toronto native, Jordan “DJ Swivel” Young spoke about his unlikely road to working on one of the most anticipated albums of 2011, B’s “4” (due June 28).

“I was cleaning toilets, ordering food, doing maintenance around the studio when I first started,” Young says, recalling his internship days. “But it never felt like a day of work. That’s when I knew I’d found my calling.”

Young dishes on 120-hour work weeks, technology and recording studios. He notes with enthusiasm that it’s an honor to record “the greatest singer of our generation.”

Read the story below.

When did you find out you were going to work with Beyoncé?

Young: A friend of mine, [BET “106 & Park” associate producer] Omar Grant, who was working at Epic Records at the time, worked with Destiny’s Child years ago. And I guess Beyoncé needed a fill-in engineer for the day. This was April 2010. She’d finished her last album and . . . was ready to get back in. Beyoncé wanted to cut a new song . . . I came in and she told me, at the end of the day, that I did a great job. A few months later, I got a callback to do more sessions.

We pretty much worked every day nonstop. B’s a machine. We recorded more than 70 songs. It was by far the greatest experience I’ve had in the studio. I spent more time with Beyoncé in the last year than I have with my own family in six years [laughs].

Some of “4” was recorded overseas, wasn’t it?

We rented a mansion in Australia. In one room Kanye West and Jay-Z were doing their “Watch the Throne,” and we were in another room [recording “4”]. It was incredible. Jay and Kanye recorded in a living room . . . so we shipped all the gear in, rented what we needed to and built two studios. Beyoncé and I recorded in the theater room.

But the first studio we went to overseas was in [England] . . . a place called Bath. Peter Gabriel has a studio in a village that looks like “The Lord of the Rings” called Real World Studios. Beyoncé and I were in Gabriel’s private room . . . It has every musical instrument that he ever collected hanging on the walls. It looks like a madhouse for music . . . a really creative space.

Is Beyoncé a studio tyrant?

[Laughs] She is, but not in an authoritative way. She’s a sweetheart to work with . . . when you are on your shit. I pride myself on being really fast and able to execute all the ideas that she wants. Because she’s on her shit, if you’re not, then she’s going to find somebody that is.

One of the songs that leaked, “Party” [produced by Kanye West and featuring André 3000], has a very early-’90s R&B sound. How did you achieve that?

That was the first record I ever cut with her, before we even started the album. Kanye sent it to her . . . that early-’90s inspiration was already there. Beyoncé was experimenting . . . with everything. “Party” . . . sounds like you’re at a summer cookout. She got that point across in the vocals.

One of the pressures of being Beyoncé is that she has to set the trends . . . everyone looks to her to create what’s next. There’s nothing on the radio that sounds like [first single] “Run the World.”

My favorite song is actually going to be on the deluxe [Target] edition of “4.” It’s a song called “School & Life.” It has a Prince vibe. The-Dream wrote and produced it, and it’s basically a song about life and growing up. We recorded that toward the end of the project. As soon as I heard it I told B, “That’s the one . . . I love that song.” I actually got the chance to mix that record. It was incredible that she allowed me to do that.

It seems like recording engineers have become an endangered species, given that anyone can purchase Pro Tools.

It’s easy for people to do their own setup at home . . . and get a decent sound. But the problem is, a lot of people don’t know how to record. You may have the greatest mic and all the greatest gear, but then your vocals are distorted. One of the problems is, kids are trained to just hear MP3s . . . very loud. They don’t care about the sonic qualities of the song. But you can’t fight technology [laughs].

Do you think to yourself, “I’m 26 years old and working with a global superstar. Can it get any better than this”?

Yeah [laughs]. It’s been such a ride. But the important thing is, I never stopped. I’ve never taken a vacation. When you’re not around you miss opportunities. That’s why I have no problem being in a studio 120 hours in a week. That work ethic is what helped me get to where I am so quickly-I’m now mixing Beyoncé records. No other 26-year-old can say that.