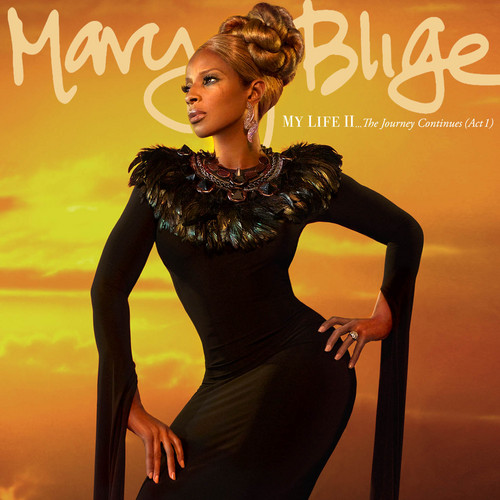 It’s been 17 years since Mary J. Blige released her breakthrough album My Life. Ten albums later, she picks up where the story left off on My Life II… The Journey Continues (Act I). Rap-Up.com got a first listen to the Queen of Hip-Hop Soul’s highly-anticipated sequel at a listening in Los Angeles.

The 15 tracks include a mix of club bangers, ballads, mid-tempos, and plenty of superstar guests. MJB duets with fellow diva Beyoncé on the female empowering “Love a Woman,” falls for “Mr. Wrong” on her Drake-assisted single, and gets deep with Nas on the hip-hop throwback “Feel Inside.”

Read Rap-Up’s exclusive track-by-track breakdown of what you can expect come November 21.

The album opens with Mary having a conversation with Sean “Diddy” Combs. During their phone call, she asks her former label boss and mentor what he thinks about her doing a sequel to the 1994 album he executive produced. “It would never be complete without you,” she tells him, to which he responds, “Let’s get it.”

A previously leaked version of the record featured Nicki Minaj, but it’s Nas who appears on the final version. Written by Andrea Martin (Melanie Fiona, Leona Lewis), MJB and Nas reminisce over a hip-hop-heavy beat. “Remember when we loved each other/ Bathtub scrubbed each other/ Chillin’, champagne spillin’/ Feelin’ like this shit gon’ last forever,” raps Nas, while Mary pours out her heart as she recalls a past relationship.

The drum-patterned track, written and produced by Rico Love, opens with a rap from Mary’s alter ego Brook Lynn. “Homegirls love me and we be riding Phantoms/ Mad chicks hate me ’cause I be writing anthems/ Plus you know I’m loaded, just signed an expansion/ Yeah I’m goin’ ’cause he’s dark and he’s handsome,” she rhymes. A lovestruck Mary puts everything aside and rushes to her man’s side when he calls her. “It’s something different/ Something crazy happens/ I’ll come running when I hear my phone ring,” she sings as she makes the late-night drive. “Gotta get to my baby.”

Another one of Rico Love’s contributions, this bass-heavy club banger is one of the standouts on the album. Busta kicks off the feel-good record with his rapid rhymes (“Hot and steamy like my mother cooked a little rice up”) before throwing it to Mary, who tells her girlfriends she’s staying home with her man so they can take their relationship to the “next level.” Bussa Bus peppers the track with his signature ad-libs as Mary revels in her love.

MJB turns Rufus & Chaka Khan’s joyful classic “Ain’t Nobody” into a 2012 dance floor anthem with help from Rodney “Darkchild” Jerkins. Mary lays down Chaka’s familiar lyrics over the thumping bassline. This one is sure to be heard at weddings everywhere.

Mary puts in overtime as she sings about giving all her love on the album’s soulful first single produced by Eric Hudson.

No matter who or what may try to come between them, Mary stays true to her man on this rocking mid-tempo, where she professes her love and loyalty. “They were right, love is blind/ I can’t see nothing but you,” she sings, while letting him call the shots for the night. “And that’s why I don’t mind saying I love you,” she says on the hook.

A fragile MJB deals with the aftermath of a painful breakup on the echoing ballad. “Baby I gave you everything that I could give you/ So I made my decision, that loving you’s been a mission,” she sings over chants of “Ayyy ohhh.” “I’m in no condition to love you.”

The second single from My Life II opens with a verse from Drake. On the Jim Jonsin and Rico Love production, Mary finds herself falling for bad boys despite what her family tells her. “Don’t it seem like I’m always there when it matters, but missing most of the other time, a terrible pattern,” spits Drizzy, as Mary sings, “Bad boys ain’t no good/ Good boys ain’t no fun.” Despite her broken heart, she can’t move on.

Rick Ross intros the breezy track in his husky voice, while Mary wonders why she and her man just can’t get it right. “She fell in love with my technique/ I made her call me boss when we in the bed sheets,” raps Rozay, who returns later in the song. “Hold your glasses up, baby/ You’re in the presence of greatness/ It’s the queen of our time, Mary J.,” he proclaims.

Mary J. Blige and Beyoncé represent for the ladies on this soulful mid-tempo. The powerhouse divas take turns telling the opposite sex what they want in a relationship while displaying their powerful pipes. Mary opens the empowering track before B chimes in. “A woman needs you to love her, she needs more than sex,” declares the pregnant songstress. Fellas, take notes.

You can feel the emotion as Mary shares her pain on this powerful ballad. “You didn’t even have the decency to intervene when I was begging for you to love me,” she tells her lover, but all she gets in return is the cold shoulder. “I try my best to keep you here, but it’s hard to hold a shadow.”

This track was not played during the listening.

A cover of Justin Timberlake signee Matt Morris’ “Someone to Love You,” Mary effortlessly glides over the tender, stripped down production, which features acoustic guitar. “But you need to someone to love you, need someone to hold you, tonight,” she sings in a soothing tone.

The Underdogs-produced song was recorded as the theme for the movie The Help and is a fitting conclusion to the album. Mary weathers the storm and emerges stronger after her long journey. “Nothing ’bout my life’s been easy/ And nothing’s gonna keep me down,” preaches a resilient Mary as Act I of her sequel comes to a close.