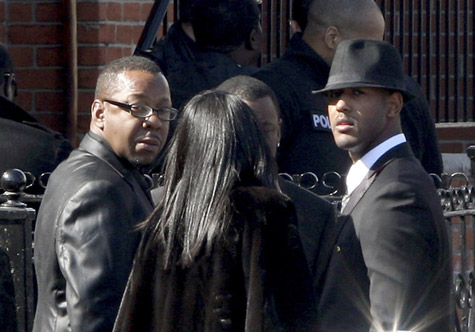 While most will remember a lovely tribute to Whitney Houston, Bobby Brown will carry a different memory. The ex-husband of the pop icon departed early from the funeral service in Newark, New Jersey, after bringing a large group of guests with him. The New Edition singer arrived at the New Hope Baptist Church to pay his respects to his former wife and became visibly upset when he was told by security that everyone in his party could not be seated. He walked out of the church and later released a statement.

“My children and I were invited to the funeral of my ex-wife Whitney Houston. We were seated by security and then subsequently asked to move on three separate occasions. I fail to understand why security treated my family this way and continue to ask us and no one else to move. Security then prevented me from attempting to see my daughter Bobbi Kristina.

In light of the events, I gave a kiss to the casket of my ex-wife and departed as I refused to create a scene. My children are completely distraught over the events. This was a day to honor Whitney. I doubt Whitney would have wanted this to occur. I will continue to pay my respects to my ex-wife the best way I know how.”