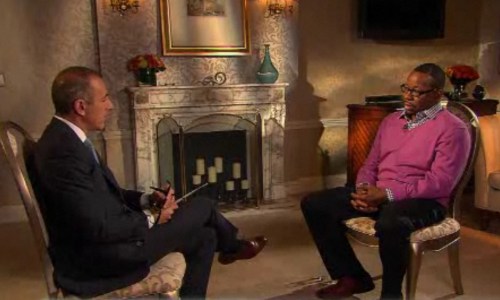 Bobby Brown opened up about the death of Whitney Houston during a one-on-one interview with Matt Lauer on the “Today” show. The New Edition singer, who learned about his ex-wife’s passing through his bandmate Ralph Tresvant, recalled first hearing the tragic news and responded to criticism that he was partly responsible for her demise.

“I just started crying,” said Brown, 43. “You never expect someone close to you to just die. It was really hard.”

The toxicology report concluded that Houston died from accidental drowning and had cocaine in her system at the time of death, which surprised Brown. “I was hurt. Me being off of narcotics for the last seven years, I didn’t know that she was struggling with it,” he said. “But at the same time, it’s a hard fight to maintain sobriety that way.”

While he doesn’t blame himself for her death, he wonders what could have been done differently. “Maybe I coulda done something different to ensure that she had a longer life,” he added. “But you have to want it, you know? Some things just happen. God probably just needed her for the choir up there in heaven and that’s the biggest voice you have.”

Despite those who say he contributed to her death, he says drugs were a part of her life before he met her. “I didn’t get high on narcotics before I met Whitney. I smoked weed, I drank beer, but no, I wasn’t the one that got Whitney on drugs. I’m not the reason she’s gone.”

Their 2005 reality show “Being Bobby Brown” shined a spotlight on their relationship. “It makes me feel terrible, but I know differently. If anyone ever knew us, if anybody ever spent time around us instead of time looking through the bubble, they would know how we felt about each other. The reality show gave us a wake-up because we were able to see what other people were saying about us. We were able to see that our drug use had affected our relationship, had affected the love that we felt for each other.”

Brown, who’s about to get married again soon, will always have love for his ex-wife. “I had 14 beautiful, beautiful years with that woman. I loved that woman with everything that I am and I believed she loved me the same way,” he said. “Even though I’m getting married soon, my fiancée knows how I felt about that woman, my kids know how I felt about Whitney, that’s no secret. I was in love with her deeply.”