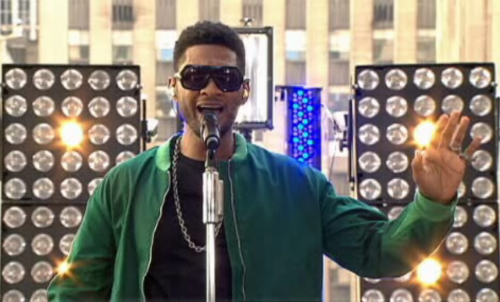 Usher  was up early Friday morning, as he was chosen to kick off NBC’s “Today” Show ‘Summer Concert Series.’ Fans lined up in New York’s Rockefeller Plaza to catch the R&B star performing his hits including his chart-topping singles “OMG,” “Without You” and “Climax”

He spoke with Matt Lauer about his upcoming album Looking 4 Myself, due June 12. “The last two, three years of my life have been an incredible journey musically and emotionally, so all of the finds of Looking 4 Myself went into this album,” he said.

“There’s a mantra that I’ve kinda adopted and it is evolve or evaporate. That is really the meaning of life, if we decide to not allow ourselves to move forward musically, in life, whatever it may be, we’ll never see the beauty in it.”

He shouted out his two sons Usher Raymond V and Naviyd Ely Raymond who were watching at home. “The most important part now is being involved as a person, being an incredible father,” explained the 33-year-old singer. “That’s probably one of the greatest goals of all. Receiving awards, having houses, cars… That doesn’t mean anything. Having incredible young men raised is the most important part of all of it.”