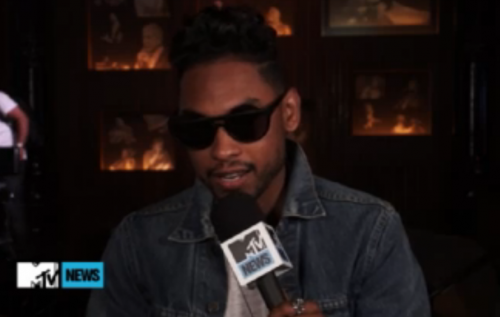 Prior to his performance at Joe’s Pub in NYC this past Tuesday night, Miguel sat with MTV for a brief interview regarding his newly released EP, forthcoming album Kaleidoscope Dream, the unique release plan they are rolling out and he even exclusively revealed the next single coming from the second EP.

Speaking about the upcoming “Kaleidoscope Dreams: Air Preview” EP, he described it as “really light and fun,” and exclusively revealed to MTV that the title of the next single from ‘Air Preview’ is called “Drugs,” and it is sure to get the fans talking.

“Let’s just say the single for the Air Preview should strike up quite a bit of conversation. I think it’s going to be a lot of fun,” Miguel said. “It’s a very personal and, I guess, kind of carefree song.”

Miguel admits that the tracks on Water Preview may be all about romance and relationships, but since his 2010 debut, All I Want Is You, Miguel has done a lot of growing up and says Kaleidoscope Dream is a “clear projection of my life.”

“The first album, All I Want Is You, revolved so much around my romantic experience. I’ve had three major relationships; each one of my girlfriends kind of taught me something new,” Miguel said. “This time around, I wanted to discuss more of my perspective of life — not necessarily with the opposite sex, and I do that on the album as well, but the majority of the album, I would say, is about my life.”