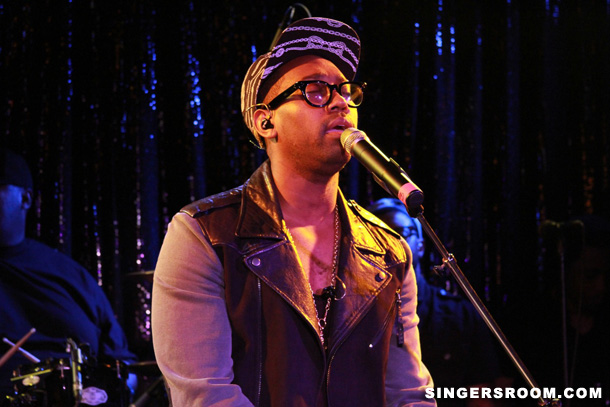 This past week PJ Morton made his official YMCMB introduction to New York City with a performance at Canal Room. The singer-songwriter, musician was supported by label family including Birdman, Slim, Mack Maine, Busta Rhymes, Shanell and Jay Sean. Our friends at Singersroom were on hand to cover the event. Read what they wrote below and check out a performance clip of PJ performing “Love You More” with Emily King.

During the show, which saw Morton premiere the music video for his new single “Lover” featuring Lil Wayne, he perform several songs from his catalog, in addition to several covers. Taking fans on a roller-coaster ride with uptempo and slow-winding records, Morton’s showmanship was front and center during the intimate showdown. In the video below, he calls on friend and soul singer Emily King for a duet performance of his song “Love Your More,” which features southern hummingbird Tweet on the original version.

Singersroom spoke with Morton following his performance and he told us how he linked with YMCMB. “A mutual friend of ours, who we all went to high school with, was a big fan of my music and was always following me and he started to work for Mack Maine and kind of just re-connected us,” says Morton about signing with the empire via Mack Main’s production company. “Mack Maine is a real music fan, he loves real music and live music and instrumentation. I just seemed like a perfect time to work together.”

“I always definitely respected him for his music at a young age,” Mack Maine adds about knowing Morton since high school. “I signed him to my production company Soothe Your Soul, which is distributed through Young Money/Cash Money. With Soothe Your Soul, I always wanted my first act to be different from anything we had at Young Money…he was perfect.”

Beyonce Shines at "I Was Here" Video Shoot