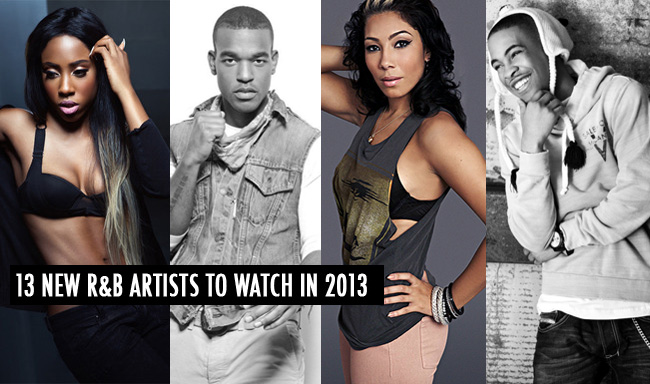 R&B is at a special place right now; it is evolving again.  The call to action of supporting the genre and bringing back feelings has been harnessed by a new generation. It is once again exciting to watch the emergence of raw talents pushing for what they believe in, and using their unique perspectives on sounds, styles and influence. Soul and R&B seems to be found all around now, if you look and listen openly, but there is room for all of it, from the traditional to the commercial, from the alternative to the sexual. It’s living, and it’s not going anywhere.

Moving on into the new year, we have had our eyes and ears on so many new artists, there is truly something or some voice out there for everyone now, and it wasn’t even real easy narrowing down a list to 13.  After our deliberations though, we are happy with this list, and at the end of the day every artist here, should be on your radar.

Sevyn Streeter is already an experienced singer/songwriter and performer, who previously launched her career as a member of two previous girl groups, including RichGirl, where she found some success under producer Rich Harrison. Following a disbandment of the group, Sevyn connected with superstar Chris Brown, and began writing songs for many R&B stars, including Alicia Keys, Mary J. Blige, Trey Songz and of course Chris himself. As one of the first artists on his CBE imprint, Sevyn is working on her anticipated debut album via Atlantic Records, which has been preceded by the impressive first single “I Like It.” Making a very strong impression with the music video, we are excited to see what is to come from Sevyn this year. [SevynStreeter]

Elijah Blake is a new name to many, but he has already amassed a strong following of supporters and fans. As many new artists today, Elijah first found success behind the scenes, through songwriting. Going by the previous name Redd Stylez, the Florida native began working with producer Troy Taylor and landed a placement with Trey Songz, which lead to writing for artists such as Mary J. Blige, but it was last year when he made his major impact, penning Usher’s massive hit “Climax.” Following a name change, and a new record deal, with producer No ID’s imprint Artium imprint through Def Jam, Elijah landed features on Rick Ross, The Game’s and Keyshia Cole’s new albums, plus a placement on Rihanna’s Unapologetic; and he released his debut EP ‘Bijoux 22’. The project impressed many and solidified Elijah as one of the most anticipated new artists of 2013. Don’t believe him, just watch! [ElijahBlake]

Eric Bellinger has been building a resume of very impressive writing credits over the last couple years, from the likes of Usher, Chris Brown, Jennifer Hudson, Justin Bieber and many more. The L.A. native has working on his own material behind the scenes as well, with two self-released mixtapes under his belt, he is looking to make a major impact with the upcoming project, “Born II Sing III,” due out in February. With strong talent on both sides of the mic, you should pay attention to this rising singer-songwriter. [EricBellinger]

Austin Brown caught national attention last year when he premiered the video for his buzz single, “Menage A Trois,” on BET’s ‘106 & Park’ and became a trending topic on Twitter. The California native has a raw and honest talent, one that he inherited from his legendary family, but one that can carry the legacy on into the new generation. Austin released his debut mixtape “Highway 85” at the end of 2012 to the delight of fans worldwide, and it seems to be just the beginning of the road for him. [AustinBrown]

Sebastian Mikael is a real, natural talent with heart and soul. A native of Sweden, this singer-songwriter attended Berklee College of Music in Boston, where he honed his skills as a musician and songwriter. Previously named De-Lor, he landed a deal with Slip-N-Slide Records following the release of his mixtape “J’Adore.” The label has since partnered with record executive Sylvia Rhone’s new company Vested In Culture through her joint venture with Epic Records. Following the release of some truly heartfelt buzz songs Sebastian is working on his debut album due this year, and we can’t wait to hear what’s to come. [SebastianMikael]

BJ The Chicago Kid is an old soul with a contemporary attitude. As an up and coming artist the Chicago native built a name for himself in the underground and indie hip-hop scenes through guest appearances and organic collaborations. With the release of his mixtape/album “Pineapple Now-Laters” last year, BJ turned casual listeners into full-time fans, and landed himself on the roster of Motown’s newly revamped label. For those asking where the soul went in R&B, BJ has something for you. [BJtheChicagoKid]

August Alsina has been compared to an early Trey Songz, the new R&B bad boy. But, that is good! The game needs that artist. There is plenty of room for the next edgy bad boy that isn’t ready to be in love, or just sing about being in love. August has been on a strong path of self-promo, releasing a handful of mixtapes and videos as his fan base continues to grow. The New Orleans native is working on his debut album, which is due later this year via The-Dream’s Radio Killa imprint and Island Def Jam. [AugustAlsina]

Jhene Aiko captured the hearts and minds of many with her independently released mixtape “Sailing Souls” back in 2011, and since she has built a high anticipation for her debut album. Last year, the California native signed with producer No ID as a part of his burgeoning imprint Artium, through Island Def Jam. Jhene teased fans with only a couple of releases in promotion of the album in 2012, but she is working hard on the project, along with touring (she opened for the Nas & Lauryn Hill tour), and her forthcoming album, Souled Out, has become one of the more anticipated debuts of 2013. [JheneAiko]

Ro James has been building his fan base like the local singers of the past, one performance at time, but the New York based vocalist might very well be one of your favorite artists, favorite new artists. Making his official debut last year, Ro released only a few records, each were intended to lead into the release of his first project, “Coke, Jack & Cadillac’s.” As new listeners are organically discovering him, and previous fans look for more, Ro is currently working with some big name producers, and we will patiently wait for the soulful man in the black hat to drop when he’s ready. [RoJames]

Rocki Evans (CharlieRED) is another old soul with a contemporary attitude, funny because him and BJ The Chicago Kid are cousins. Strong bloodline right there! Rocki has been releasing music online for a few years actually, all while honing his craft and developing his sound. Well, that just might be here right now, with the emergence of his new project CharlieRED. A collaboration with up and coming producer/musician Cobain Ivory, the duo have harnessed a sound of pure feelings through their debut EP ‘Religion.’ Rocki brings rawness, honest and soulful, laid over rock-tinged production that commands your attention. [RockiEvans]

Bridget Kelly caught attention when Jay-Z co-signed her and offered the singer-songwriter a deal at Roc Nation.  The New York native began to spark serious interest from fans when she released her Frank Ocean-penned single, “Thinking About Forever.” Although the song ended up back in Franks hands, Bridget has pushed on.  Her raspy angelic tone is something that draws in the listener immediately, and many are just waiting for BK to rise to the occasion. Releasing her new single “Special Delivery” in August of 2012, she brought back a reminiscent sound of R&B that is too often overshadowed in today’s music. With the right material, this year should be very kind to Bridget Kelly. [BridgetKelly]

Stacy Barthe has been behind the pen writing for artists such as John Legend, Alicia Keys, Brandy, and more. Now, Stacy is ready for her own spotlight. Releasing two acclaimed EP’s ‘Sincerely Yours’ and ‘In the InBetween,’ there is no doubt that her soothing tone and heartfelt lyrics will command attention. Closing out last year on a high note with a collaboration with T.I. and the iconic Andre 3000 on “Sorry,” she is readying her third EP ‘P.S. I Love You,’ due soon. The Motown Records artist is ready to invite the world in on her artistry. Stacy is truly a rare gem and she is one that needs to stay on your radar. [StacyBarthe]

Luke James, what else needs to be said, if you don’t know the name by now you must be sleep. Over the past year, Luke continued his artistic development, wrote and recorded for his debut, performed all over the country, and opened for Beyonce. He remains in the process of crafting his debut album, but in the meantime the New Orleans native has been nominated for a Grammy, for his debut single “I Want You,” under the ‘Best R&B Performance’ category. Luke is a truly gifted talent and honest performer, we will continue to watch him soar. [LukeJames]

There are plenty more emerging and rising talents out there, too many to include, but let us know some of your favorite new artists if they weren’t mentioned, and #SupportRnB.

Solange Performs "Losing You" on ‘Le Grand Journal’ in Paris