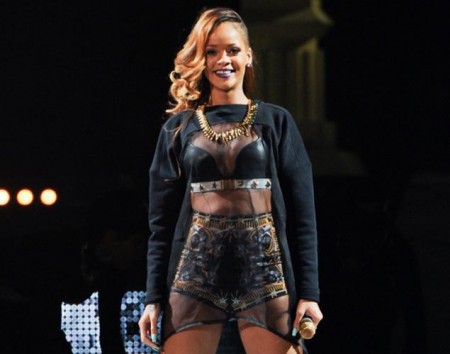 25-year-old songstress, Rihanna, can add another notch to ever growing belt of success. The “Umbrella” singer is reported by the Los Angeles Times to be honored at this year’s America Music Awards with the first ever “Icon Award”.

Catch the full story next…

According to AMA producer Larry Klein, the award was designed to ” honor an artist whose body of work has made a profound influence over pop music on a global level.” Rihanna, who has sold a plethora of albums and singles worldwide during her 8-year career span, is one of the generation’s most influential women under the age of 30. Producing 12 No. 1 singles on the Billboard Hot 100 from her seven albums and holding the top spot for best-selling digital artist of all time, there should be no question as to why the artist is the top candidate to receive the award. Klein went on to state, “Rihanna’s iconic and innovative sound has enabled her to become one of the most influential and bestselling artists of all time.”

In addition to receiving the award on Sunday, November 24, fans can look forward to seeing the multi-talented superstar perform live on the telecast from the NOKIA Theatre L.A. LIVE. Also nominated in four categories including Artist of the Year, Favorite Pop/Rock Female Artist, Favorite Soul/R&B Female Artist, and Favorite Soul/R&B Album for Unapologetic, there is clear indication that the Rihanna reign just won’t let up.

Here’s to her growing success!

TLC Respond to Pebbles Comments on 'The Wendy Williams Show'