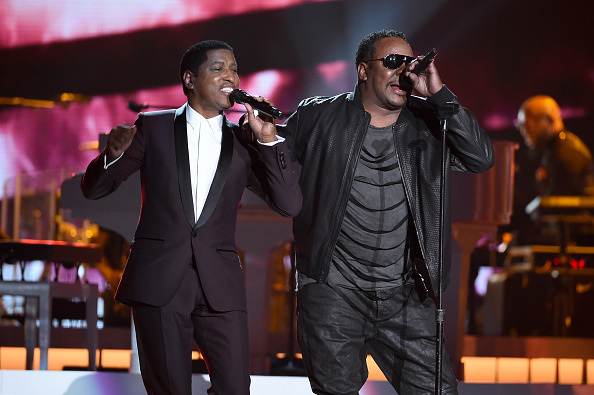 Kenny “Babyface” Edmonds was honored with the Legend Award at the 2015 Soul Train Awards on Sunday night. With a songwriting catalog that is equal to or greater than many of the most infamous songwriters in the history of music, and a career that spans over 25 years, the award was been long overdue, but the tribute was worth the wait.

After receiving the Legend Award by longtime friend and musical collaborator L.A. Reid, Boyz II Men, Fantasia, Brandy, Bobby Brown and Tevin Campbell all showed up to tribute the singer-songwriter/producer, all singing songs that he wrote for them or others.

Tevin Campbell returned from obscurity to sing “Can We Talk,” Brandy sang her Soul Food soundtrack hit “Sittin Up In My Room,” Fantasia slayed Whitney Houston’s “Shoop” and Karyn White’s “Super Woman,” Bobby Brown turned up the tempo with his hit “Tenderoni” as Kenny joined him, and Boyz II Men closed out the tribute performing “I’ll Make Love To You” and “End of the Road.” Edmonds then performed his own solo hit “Whip Appeal,” before exiting the stage to a roaring applause from the standing audience.

Watch the full 16-minute tribute below!