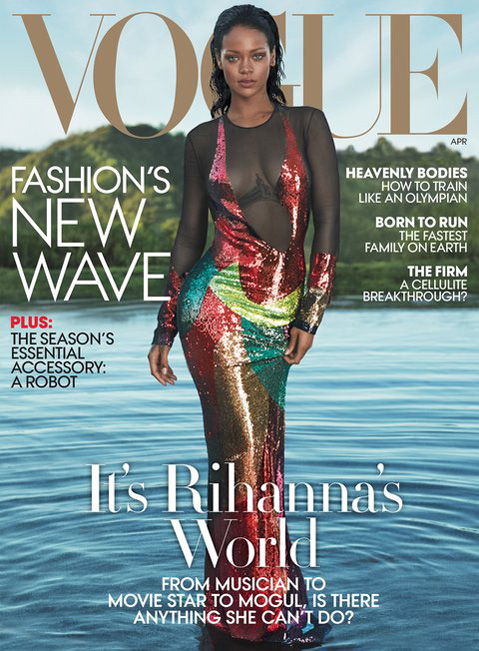 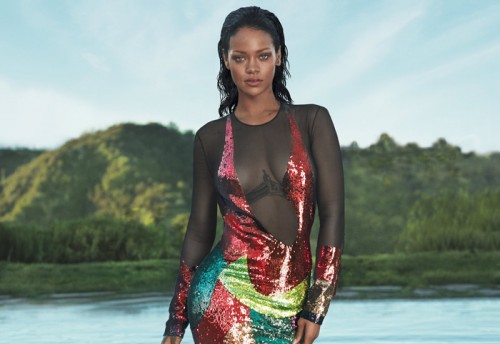 We can never get enough RiRi.

Just two weeks after gracing the cover of British Vogue, Rihanna hits the front page of VOGUE, again. The “Work” singer is back on the April 2016 cover of the U.S. edition of the fashion magazine, which proclaims, “It’s Rihanna’s world.”

The Bajan beauty dons a colorful Tom Ford dress while standing in a pool of water on the stunning cover. In the other photos, shot by Mert Alas and Marcus Piggott, she rocks a sequined Givenchy Haute Couture gown and a sequined Saint Laurent dress.

She attributes her style to her favorite era, the ’90s, and models like Naomi Campbell and Cindy Crawford, as well as Mary J. Blige, Lil’ Kim, and Gwen Stefani. “All my favorite artists and fashion icons and models are from the nineties. Everybody was just so fearless,” she said.

In the interview, the star of the upcoming French sci-fi film Valérian and the City of a Thousand Planets opens up about her single status, “Work” collaborator Drake, and her only regret in life.

She also shrugs off a rumored rivalry with fellow pop queen Beyoncé. “That’s just not what I wake up to. Because I can only do me,” said RiRi.

See more pics and read highlights from the interview below.

ON HER LOVE LIFE: “My schedule is so crazy right now. It’s definitely going to be a challenge when I do decide to pursue a relationship … but I have hope!”

ON ANTI: “I just gravitated toward the songs that were honest to where I’m at right now. It might not be some automatic record that will be Top 40. But I felt like I earned the right to do that now.”

ON THE LYRICS TO “WORK”: “You get what I’m saying, but it’s not all the way perfect. Because that’s how we speak in the Caribbean.”

ON DRAKE: “Everything he does is so amazing.”

ON HER SHEER CFDA DRESS: “I just liked it better without the lines underneath. Could you imagine the CFDA dress with a bra? I would slice my throat. I already wanted to, for wearing a thong that wasn’t bedazzled. That’s the only regret I have in my life.”

ON BREAKING BOUNDARIES: “Women feel empowered when they can do the things that are supposed to be only for men, you know? It breaks boundaries, it’s liberating, and it’s empowering when you feel like, Well, I can do that, too.” 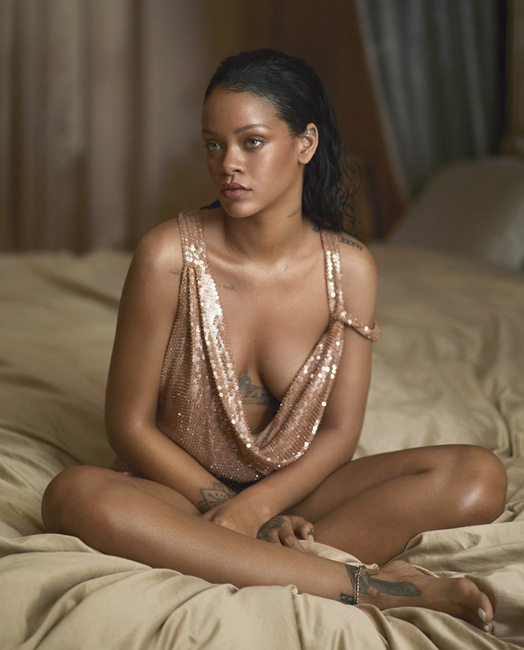