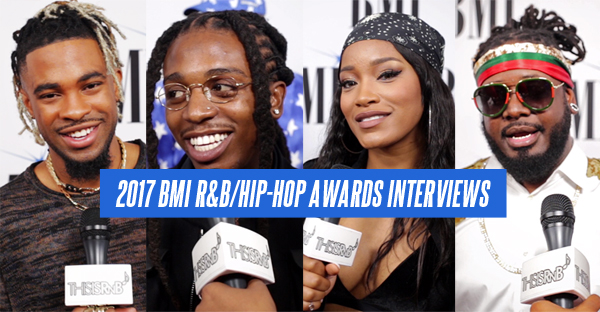 Last week, Broadcast Music Inc. (BMI) celebrated the songwriters, producers and publishers of the year’s most-performed R&B and Hip-Hop songs during the 2017 BMI R&B/Hip-Hop Awards in Atlanta, GA. The iconic Patti LaBelle was celebrated and honored with the night’s highest honor, receiving the BMI Icon Award and a very special tribute performance.

Prior to the show, ThisisRnB‘s Ni’Kesia Pannell caught up with a slew of today’s brightest R&B stars and hit-makers while on the red carpet at The Woodruff Arts Center’s Symphony Hall.

With his sophomore album, Audiology, out now, singer-songwriter Elijah Blake spoke about the importance of this album in his career, and how he has evolved to find the creative space which he needed to share some of the stories.

Buzzing R&B star in the making, Jacquees has been grinding for years and now he has his very first gold-certified hit single with “B.E.D.“.  The Atlanta native spoke about how he is enjoying the success, and what fans can expect next. While talking about his anticipated debut album, 4275, Quees exclusively revealed to us that his next single is a collaboration with Trey Songz, and it’s dangerously catchy.

Additionally, hitmaker Verse Simmonds spoke candidly about the importance of the BMI Awards for creators and songwriters. He also shared some exclusive details about his own sophomore album, which is coming soon, and the first release is expected to feature Ty Dolla $ign.  Singer/actress Keke Palmer shared her love for Patti LaBelle, and gave us some much needed info on her own new album, which is on the way, and who would make her dream collaboration.

T-Pain was rushing through the carpet, but he stopped by to briefly talk about his anticipated acoustic tour, which kicks off Oct. 4 in San Francisco. The Grammy Award winner even revealed that the tour performances will actually be recorded and turned into an album as well.

Check out all the interviews below.