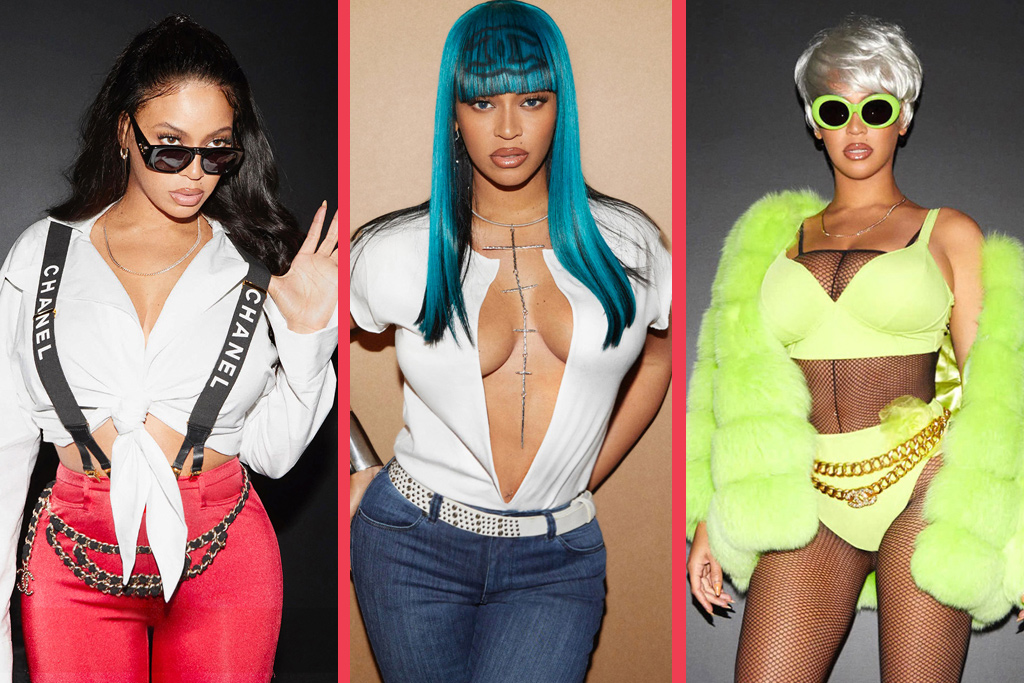 Beyoncé buzzed like the Queen Bee this Halloween. ‘Yonce has paid tribute to the iconic rap queen with a series of photos recreating five of the Brooklyn MC’s famous outfits.

Uploading a series of images to her website, Bey showing off the detailed process and the inspiration behind each outfit. “Hip-hop would not be the same without our original Queen Bee,” she wrote in a statement.

First, the superstar rocked a white button-up shirt with Chanel suspenders, red pants, and black shades to look like Kim in Missy Elliott’s “The Rain” video. This look she wore to Kelly Rowland’s Halloween party while her husband JAY-Z dressed up like his late friend, The Notorious B.I.G.

But that was just the beginning. Beyoncé also replicated Kim’s famous blue Chanel hair, which the Junior M.A.F.I.A. rapper wore in a photo shoot for Manhattan File Magazine in 2001. The LEMONADE star went all out, wearing the exact same jewelry and blue contacts to complete the look. She even kept the blue contacts on for her next Lil’ Kim-inspired look. Taking a page out of the Queen Bee’s photo shoot for Today’s Blackwoman, ‘Yoncé wore a blue fur coat over turquoise lingerie.

Next, she also wore a nude bodysuit with strategically-placed fur, remaking Kim’s 1999 Source Awards outfit. Plus, she rocked a neon green fur jacket over fishnets and a matching lime green bra and panties set, which Kim wore on the “No Way Out Tour” in 1997.

The Queen Bee was more than flattered by Beyoncé’s homage. “@Beyonce the resemblance is crazy!!” gushed Kim. “Match made in heaven ? Every single detail is on point! I love you to pieces Bey.”