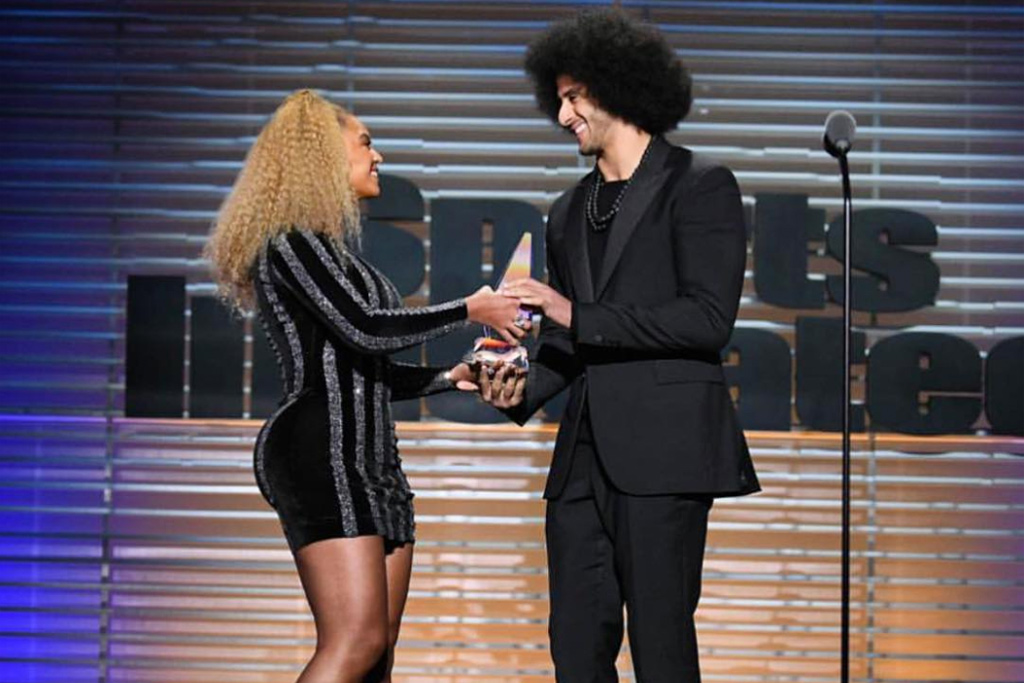 Colin Kaepernick got a surprise from Queen Bey at Tuesday’s (Dec. 5) Sports Illustrated Sportsperson of the Year Awards. Beyoncé appeared onstage to present the former 49ers quarterback with the Muhammad Ali Legacy Award.

The award is given to an athlete who uses their platform to promote change. Beyoncé said to Kaepernick: “Colin took action with no fear of consequence or repercussion only hope to change the world for the better. To change perception, to change the way we treat each other, especially people of color.”

On receiving his award, Kaepernick said: “I say this as a person who receives credit for using my platform to protest systemic oppression, racialized injustice and the dire consequences of anti-blackness in America. I accept this award not for myself, but on behalf of the people. Because if it were not for my love of the people, I would not have protested. And if it was not for the support from the people, I would not be on this stage today. With or without the NFL’s platform, I will continue to work for the people because my platform is the people.”

'With or without the NFL’s platform, I will continue to work for the people'@Kaepernick7 receives SI's Muhammad Ali Legacy award #Sportsperson https://t.co/3wqaUVYZnf pic.twitter.com/dKJNX0d8vi

When the honor was first announced by the magazine, Muhammad Ali’s wife, Lonnie, noted, “Like Muhammad, Colin is a man who stands on his convictions with confidence and courage, undaunted by the personal sacrifices he has had to make to have his message heard.”

“Thank you Colin Kaepernick. Thank you for your selfless heart, and your conviction. Thank you for your personal sacrifice. Colin took action with no fear of consequence or repercussion only hope to change the world for the better. To change perception, to change the way we treat each other, especially people of color. We’re still waiting for the world to catch up. It’s been said that racism is so American, that when we protest racism, some assume we are protesting America. So, let’s be very clear. Colin has always been very respectful of the individuals who selfless serve and protect our country and our communities and our families. His message is solely focused on social injustice for historically disenfranchised people. Let’s not get that mistaken.

Are Usher & Lil Jon Cooking Up Some New Music?