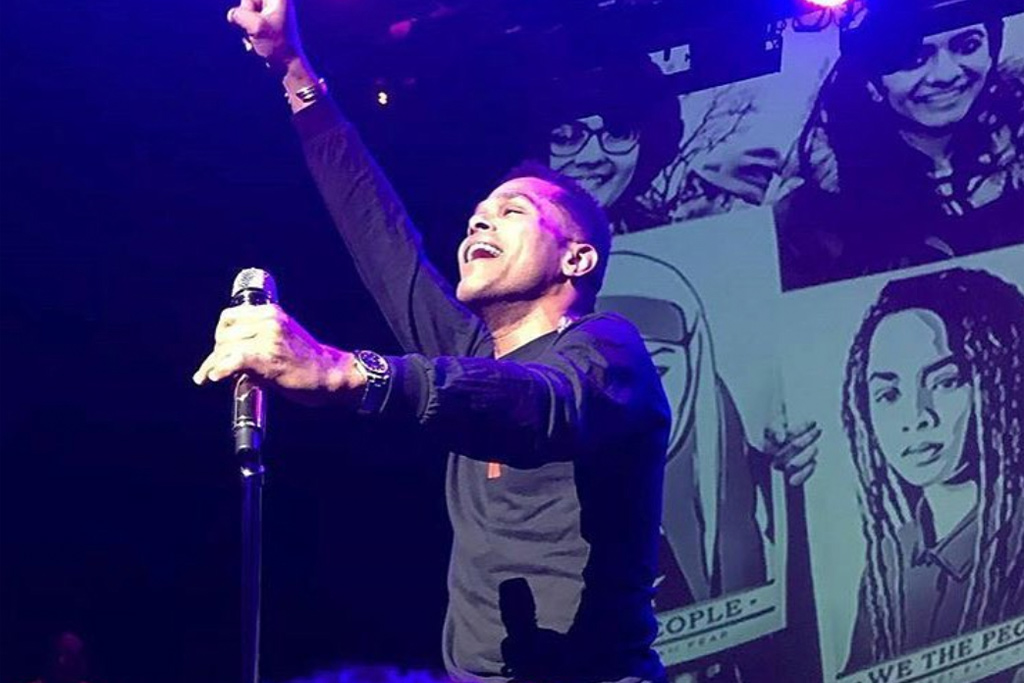 On Monday night (Dec. 4), a coalition for the continued support of social justice held a special concert in Washington, D.C. at the famed Howard Theatre. The event was titled, “We Are Here: A Poor People’s Call for Moral Revival,” and featured a performance lineup of Maxwell, Aloe Blacc, Sweet Honey in the Rock, Jasiri X, the Bronx-based Peace Poets, and North Carolinian singer Yara Allen, along with a host of faith-based leaders and activists, including the Reverend William Barber II, Reverend Liz Theoharis, the CNN contributor Van Jones, and artist Gina Belafonte, the primary organizer of the event through the social justice organization Sankofa, co-created with her father Harry Belafonte.

“When you get a phone call from ‘Mr. B,’ Harry Belafonte, it’s like a draft to consciousness,” Maxwell told Billboard. “This is about paying attention and showing love for a group that always needs both regardless of who is in office — poor people. Music brings people together in ways they’re not always aware of consciously. As the son of West Indian immigrants, growing up in Brooklyn, I know this is the best place to be today.”

the highest ||| @sankofadotorg ☝?.✌?.??you are rich in soul wealthy in spirit ||| for the legacy of harry belafonte ? #thepoorpeoplescampaign

Exactly fifty years ago on December 4, 1967, Dr. Martin Luther King, Jr. launched what was to be the final movement of his life, the Poor People’s Campaign. Intended to be a multi-racial, interfaith drive for equitable jobs, affordable housing and greater assistance to the poor, its full realization was thwarted by his assassination in Memphis, Tennessee five months later. Despite the best efforts of his colleagues at the SCLC (Southern Christian Leadership Conference) and the larger civil rights community, it never took hold.

Today, a nascent movement to continue and implement Dr. King’s vision, now entitled the Poor People’s Campaign: A National Call for Moral Revival, is being co-chaired by Reverends Harris and Barber in service to a grassroots-focused community including the Kairos Institute, Repairers of the Breach, and Campaign for Black Male Achievement among many others, with sponsorship from Ben & Jerry’s. This Poor People’s Campaign involves grassroots organizing in communities throughout the United States to engage in non-violent, civil disobedience with the aim of challenging laws on the local, state and federal level which undermine opportunities for poor people, undocumented immigrants and those threatened by police brutality to affect sustainable change.

Gina Belafonte and the Sankofa organization enlisted Maxwell and scores of other performers to support the Poor People’s Campaign through events such as We Are Here, as well as community actions, artist trainings and benefit recordings.

Maxwell, who closed the evening with his 1996 hit “Ascension (Don’t Ever Wonder),” went further. “We’ll see what happens, but truly feel like we’re gonna be alright,” he noted. “What’s interesting about getting to this place from when I grew up and first started out as an artist, is seeing the greater responsibility, not just to people of color, because I would naturally be drawn to them anyway, but everyone, people in general living in poverty who don’t have the opportunity to be educated about the system and challenging it in a certain way. Just people in general who don’t have the opportuntiy to understand the system in a certain way. Sankofa and the Poor People’s Campaign: A National Call for Moral Revival is where my vibe is.”

Thank you for showing up for us, @aloeblacc! #poorpeoplescampaign #wearehere

Are Usher & Lil Jon Cooking Up Some New Music?