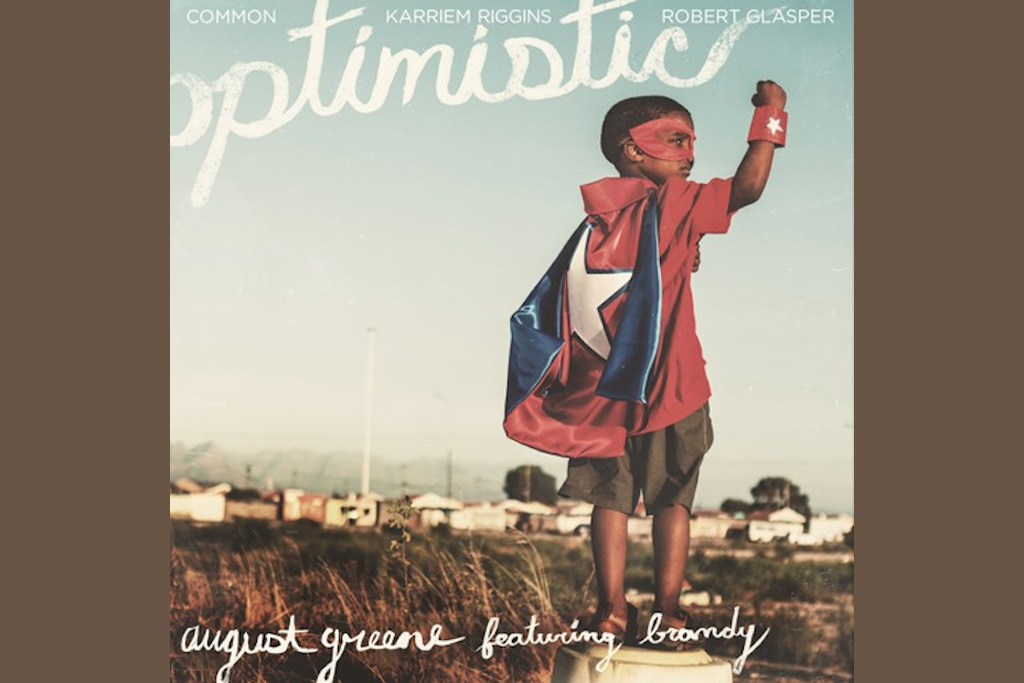 We were optimistic when we received this new collaboration and thankfully it delivered beautifully! Rapper, actor, and activist Common recently formed a new group with a couple of friends and collaborators, including GRAMMY Award-winning pianist/producer Robert Glasper, and drummer/producer Karriem Riggins.

Their new union goes by the name August Greene and they have made a positive, uplifting introduction with the aptly timed release of the first single, “Optimistic” featuring R&B veteran Brandy.

The songstress shines brilliantly on the lush record, which will automatically trigger a warm nostalgic memory for many, as it’s a remake of Sounds Of Blackness’ 1991 hit of the same name. “You’ll always do your best if you learn to never say never,” sings Brandy. “You may be down but you’re not out / And that’s where I will lift you up.”

Glasper brings a bed of soft and subtle keys to the track, while Riggins keeps the tempo moving with a bouncy drum pattern. Common’s contribution comes as a woke third verse, where the Chi-town native spits a rapid fire flow. “Envision optimism through a prism that’s optical / To see through obstacles and be remarkable,” he raps.

“Optimistic” will appear on August Greene’s self-titled debut album, which is due for release on March 9 via Amazon Music.

In 2017, Common, Glasper, and Riggins collectively won the Emmy for Outstanding Original Music and Lyrics on the strength of their song “Letter to the Free,” which was recorded for Ava DuVernay’s documentary 13th. The longtime friends and musical collaborators felt the time was right to release music from August Greene, which has themes of optimism and black excellence. They have found a sound that does not solely fit into one genre, but is truly an invigorating hybrid of R&B, hip-hop, and jazz.

“August Greene actually formed before we chose a name, before we even knew it was a band,” says Common. “Karriem, Rob and I go back many years. It was something natural. When I started working with them it was like, ‘man, this feels like home,’ and it felt new and fresh. We love working together. The music takes us all to new places and it just feels like, everything I want to be as a musician is within the group of August Greene.”

Speaking about the inspiration behind remaking “Optimistic,” Common shared the story with fans on Instagram. “It was one session we were in the live room and we were discussing music and the song ‘Optimistic’ came up in the conversation. We all talked about how it was one of our favorite songs ever created. That prompted ‘well, let’s do a remake of it. We need to do a remake of it,’ I repeated. So with no ceiling and no restrictions we just went in and recreated the song. But wait I forgot to mention we were thinking who could sing this song or should we get multiple vocalist to do it. Rob said let’s see if Brandy will do it. She just so happens to be one of the greatest voices of all time and her vocal abilities are nothing but divine. So we went into Electric Lady and re-did ‘Optimistic’ in our own way but honoring the original for how incredible and moving it is. This was created as a gospel song but transcended in the 90s into every arena, club, church or wedding you could find. We found ourselves inspired and excited about the song and I am very very excited to be releasing today on @Amazonmusic as the 1st single from our upcoming August Greene project. I hope y’all enjoy and feel Inspired. Because there is no time greater than now to be Optimistic.”