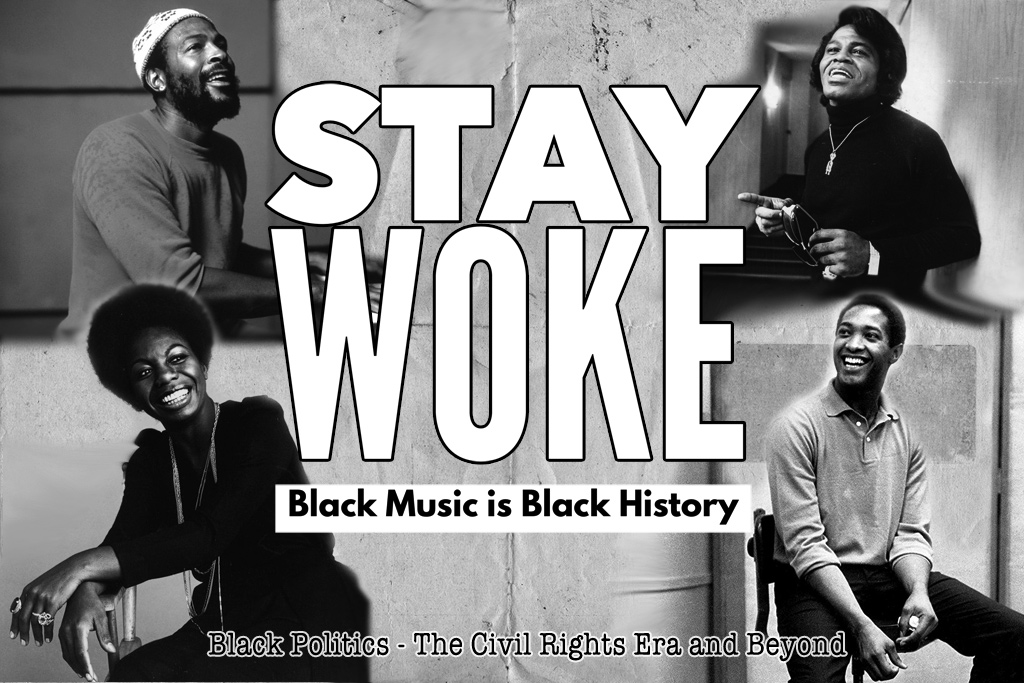 Last week, we discussed the origins of R&B, that by the end of the 1940s the genre had formed and by the mid ’50s it had commercial viability. We had created this new music but it was what black artists decided to DO with that music that would prove most important.

Through the Jim Crow era the United States was in a lot of turmoil as Black Americans were still fighting for our Civil Rights. It was R&B music that became a galvanizing force for people to march, protest, celebrate black pride, and inspire political thought and movements. This music served as the soundtrack and voice for black lives.

It is often a question if art informs society or if society informs the art? A sort of “chicken vs. the egg” type of question. There isn’t a correct, clear answer as there’s a symbiotic relationship between art and society, both influencing and shaping the other at often the same time. However, in this case it was performance art that would go onto inspire the Civil Rights Movement.

It was 1939, less than a decade before R&B was even recognized, when Billie Holiday released the song “Strange Fruit.” It started as a poem by songwriter and poet Abel Meeropol detailing the horrors of lynching and racism in the Deep South. But it was Holiday who brought the song to life. The jazz singer’s expression and soul captured the depth of pain and horrific condition of black life in a way that made mainstream, white America say “huh..this happens? Oh wow this is horrible” making the country aware of an issue that it either didn’t know existed or ignored. Billie Holiday’s voice was like the smartphone camera of the late ’30s and ’40s. Like how in recent years mainstream, white America realized police brutality is a thing that negatively impacts black people, largely thanks to smartphones capturing the innocent killing of unarmed Black men and women. Holiday’s voice sparked dialogue, conversation, and action in our communities at a time when people needed to visualize and feel what was going on. Record producer Ahmet Ertegun proclaimed “Strange Fruit” as “a declaration of war…the beginning of the Civil Rights Movement.” Indeed a fire had been lit that would and could not be contained. The Civil Rights Movement would officially begin in 1954 with Brown v. Board of Education.

After the Civil Rights Movement gained momentum and once R&B music gained its commercial footing in America, we see a slew of Black artists use R&B as a platform to promote Black power, unity, resilience and strength in the face of social/political opposition. One famous example is Sam Cooke’s “A Change Is Gonna Come” released in 1964 and one of the unofficial anthems of the Civil Rights Movement. Arousing hope with lyrics like, “It’s been too hard living but I’m afraid to die…it’s been a long time coming but I know a change is gonna come.” Cooke captured the perseverance of Black Americans and a hope for a better future.

Political and social activism wasn’t just for men. A lot of women were vital in the Civil Rights Movement as well and some used their voice in music to ignite change. Perhaps none were as passionate as Nina Simone. The 1964 song “Mississippi Goddam” was a searing, unapologetic condemning of white people and America. It was so frank and controversial that the song was banned in several Southern states. Regardless, the song spoke to the passion and rage felt by Black Americans at the time and became an anthem during the Civil Rights Movement. Simone famously performed this song in front of 10,000 people at the end of the Selma to Montgomery march in 1965. Here’s an excerpt from this poignant song:

The end of the Civil Rights Movement is considered to be in 1968 with the assassination of Martin Luther King Jr. on April 4, 1968. But, as one movement was dying another one was rising and it was mostly thanks to James Brown. In August 1968, The Godfather of Soul released the song “Say It Loud – I’m Black and I’m Proud.” It would inspire and become the soundtrack to the Black Power Movement, a movement in the 1970s concerning the need to love ourselves, work and build up our communities. We see the representation of Black people in movies, magazines, etc. with Afros during this period and the crossover success of movies and TV shows that brought a positive image of Black people to mainstream America. James Brown quelled the feeling of despair and hopelessness black people must have felt after Martin Luther King Jr.’s death with a braggadocious dose of confidence, self-love and strength that continues to empower Black people to this very day.

Throughout the Seventies we see black artists continue to use R&B music to speak on political and social matters but the scope of discussion began to widen. It wasn’t just discussion of racism any longer, but of drugs, poverty and world issues. Marvin Gaye’s seminal album What’s Going On, released in 1971 would change R&B music forever. Tackling such topics like environmentalism, racism and war in a honest yet creative way, What’s Going On continues to be acknowledged as one of the best albums of all time and has influenced and inspired every artist afterward, white or black, on how to make your music political in an accessible way.

Another Motown legend, Stevie Wonder, had transitioned from boy wonder to musical genius in the 1970s and with newfound control and independence over his music he began to discuss numerous social and political issues with famous examples being “Living For the City,” “You Haven’t Done Nothin,” and “Love’s in Need of Love Today.” However, his biggest political accomplishment came in 1983 when former President Ronald Reagan signed legislation approving the creation of the holiday Martin Luther King Jr. Day. It was Stevie Wonder with his song “Happy Birthday,” released in 1981, that largely brought awareness to the political campaign to make Martin Luther King Jr’s birthday a holiday. The success of this campaign continued to prove that R&B music can create change and serve as a voice for political/social inspiration.

1971 – Marvin Gaye releases the What’s Going On album. The title track would reach #2 on the Billboard Hot 100.